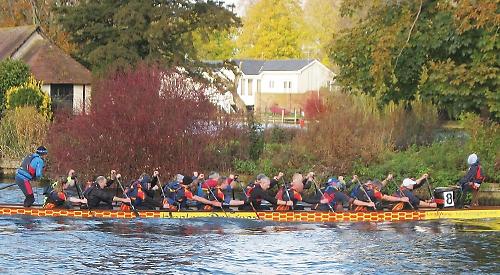 Before the event all crews gathered near the start line to observe the two minutes silence at 11am.

The series course runs for seven kilometres from the Eyot Centre, downstream around Temple Island then returning upstream to turn around Rod Eyot and back to the start/finish line at the Eyot Centre. It is a pursuit race with crews starting at 45 second intervals.

A strong and gusting north-westerly wind created difficult conditions on the downstream leg, though upstream paddling was enhanced by the following wind.

Henley Dragons made good progress on the downstream leg but suffered a setback exiting the turn around Temple Island as they attempted to overtake Pershore Dragons. The Pershore Dragons helm lost control of the boat and cut across the bow of Henley but there was insufficient space for an emergency stop and Henley hit the Pershore boat amidships knocking off it’ own head. The Henley crew remained calm and after ensuring that no one from either crew was injured got straight back into their rhythm.

On the upstream leg Henley overtook five of the crews who had started ahead of them and narrowly failed to catch Bristol Empire Dragons on the finish line. Henley Dragons finished third overall behind Rafters in top spot and Wraysbury Dragons who were second.

Also competing were Berkshire Sharks who represent the charity for visually impaired people and Berkshire Vision and Nore-Suir-Dragons who are breast cancer survivors visiting from Ireland.

The next event in the series is on December 10.