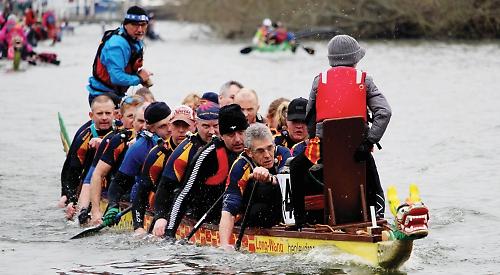 ROUND two of the Henley Winter Series was due to take place in mid-December but a heavy fall of snow overnight caused it to be cancelled at the last minute.

The Henley winter series course runs for seven kilometres from the Eyot Centre, downstream around Temple Island then returning upstream to turn around Rod Eyot and back to the start/finish line at the Eyot Centre. It is a pursuit race with crews starting at 45-second intervals. Henley Dragons made good progress on the downstream leg catching Bristol Empire Dragons. There was some hard fought side by side racing as Bristol resisted the overtaking but Henley pressed home their advantage and exited the Temple Island turn ahead. By the top of the island Henley had also passed an outrigger crew.

On the upstream leg Henley overtook three further crews who had started ahead of them and narrowly failed to catch Raging Dragons on the finish line.

In the overall results the dragon boat section was headed by Rafters with Wraysbury second and Henley third. The outrigger section was led home by Paddlesport Racing Canoe Club, Milton Keynes, then Royal Canoe Club.

The next event in the series is Sunday, February 4.