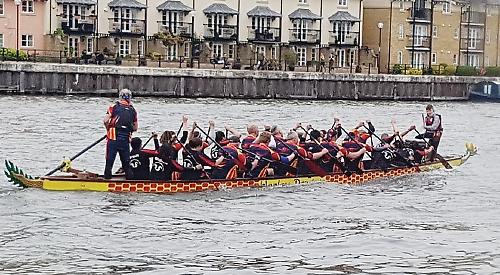 HENLEY Dragons competed in their second BDA League event which was hosted by the Bristol Empire Dragons in Bristol Harbour in the shadow of Brunel’s SS Great Britain.

Henley Dragons entered as a mixed crew with Thames Taniwhas to compete in both the 200m mixed straight and 3.5k mixed races in a competition that attracted 20 open and mixed crews, 12 ladies’ crews and two junior crews.

This is the first time that Henley Dragons has paired up with Thames Taniwhas, and they set off in a good initial time of 59 seconds. This was faster than Amathus in their initial heat with a time of 59.81.

Henley Dragons and Thames Taniwhas put in a good display where they went through to the major final where they finished second behind Typhoon.

Following the 200m straight races, Henley Dragons looked towards the 3.5km race which involved two tight turns, designed to not only test the paddlers but the helm too. This route followed up the harbour past the SS Great Britain, turning on the buoy and making their way back up for another sharp turn around to the finish.

Henley Dragons and Thames Taniwhas quickly passed Pink Champagne after the start in their quest to chase down Cambridgeshire Royals.

• Anyone interested in joining Henley Dragons should get in touch with them for further details by visiting www.henleydragons.online/