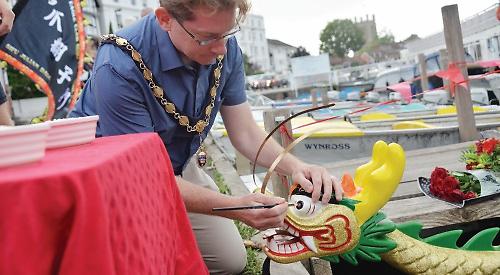 A DRAGON was “awoken” on the River Thames in Henley as part of a traditional Chinese ceremony.

The naming ceremony, known as awakening the dragon, was held at the Hobbs of Henley boatyard, off Station Road.

Dragon boats can be traced back more than 2,000 years in Chinese history and were used for religious purposes as a way of appeasing the Rain Gods.

The awakening ceremony is held to show respect to the dragon and to put it in a good mood towards its owners.

Members of the Henley Dragons paddled the boat across the river from its base at the Eyot Centre to a small wooden mooring that had been decorated with red balloons.

Flowers were laid by Pete Holloway, manager of the Eyot Centre, and club members Derek Blincoe and James Blake.

Then Mr Holloway gave the boat its name, Long Fei, explaining to the spectators that this means “flying dragon”.

Henley Mayor Glen Lambert and the club’s youngest member Connor Jones then completed the eye-dotting by applying red paint to each of the dragon’s eyes.

They also applied paint to the top of its head, its two horns and the side of its mouth with help from Mr Holloway.

This part of the ceremony is said to ward off evil spirits and prepare the boat for voyage.

Miss Cassell said: “This traditionally involves a Taoist priest dotting the protruding eyes of the dragon head carved on the boats, thus ending its slumber.”

The paddlers were then invited to light incense sticks which they had to do under a cloth after struggling to manage it in the wind and rain.

Once everybody had a burning stick, the team put them between their hands and bowed three times under instruction from Mr Dale.

Team captain Joanna Zalewska-Jarvis then took three incense sticks which were taped to the front of the boat.

The team then got back in the boat and paddled it aggressively back and forth to symbolise the dragon “bowing” to the crowd.

Four youngsters from the Eagle Claw demonstration team then performed a lion dance. Two formed a large red lion and the other two formed a smaller white lion. The dancers were accompanied by a man dressed as a “happy Buddha”.

Others members of the team played drums and symbols while they danced and interacted with the audience.

Towards the end one of the lions picked up a romaine lettuce, which was an offering to the dragon. The lettuce was split into three pieces which were thrown towards the boat but in different directions to help spread the blessing.

When they had finished, the dancers received loud applause and cheers from the audience.

To finish the ceremony, the boat was paddled around between the Eyot Centre and Henley Bridge, allowing the dragon and the spirits to be introduced to each other.

Afterwards, guests were served Prosecco and snacks provided by the club.

Miss Cassell, from Henley, said: “We were really pleased with the number of people who turned out and if the weather had been better there probably would have been even more.

“Everyone seemed to enjoy it and it was a very different thing to happen in Henley and for people to come and see.

“The dancers put on a brilliant spectacle and led us beautifully through the ceremony. It was good for the club’s reputation and to be able to market it.”

She said the boat would help make the club more competitive in the British Dragon Boat Association Premier League.

Miss Cassell said: “We go all across the country to compete so it’s nice to have a shiny, new boat which will help us show we are one of the top teams in the country.”

Councillor Lambert thanked the club for inviting him to take part in the ceremony.

He said: “I hope I have awakened our newest dragon more successfully than I awaken myself on weekday mornings!

“I read up a little on dragon boat history and was surprised to learn it dates back to ancient China more than 2,000 years ago, so I really am honoured to be part of it.”

Mr Dale said it was the first awakening the dragon ceremony performed by the Kung Fu school.

Its lion dance demonstration team usually performs at weddings, Chinese New Year celebrations and private events and once did so in front of Prime Minister Theresa May.

Mr Dale said: “We were there to help bring good luck and good fortune.”

The boat was imported from China, via Germany, through the British Dragon Boat Association. It was bought through the Eyot Centre charity.