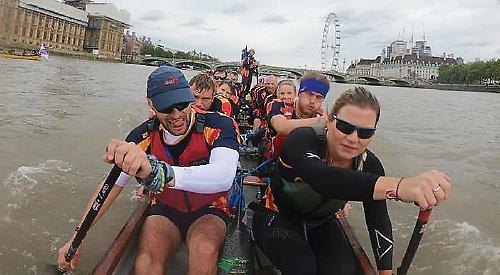 HENLEY DRAGONS were the first dragon boat to cross the line in the 21.6 mile Great River Race on Saturday.

The race, open to all paddle/rowing craft, saw boats negotiate the course from Millwall in east London to Ham in west London.

Henley showcased a team of 16 paddlers, plus a helm and drummer for the race which took place in choppy conditions with unpredictable rowing boats with a wide wing span and a requirement to navigate the river following certain bridge arches.

Starting second from the back with a handicap start, Henley fought their way through the pack of boats as they made way through London with the incoming tide.

Despite the advantages of paddling with the tide they still had to contend with a headwind throughout.

The Henley boat crossed the line in a record performance time by the club and were the third fastest boat by 11 seconds. Using the handicap system Henley finished in 45th place out of 320 boats in a time of two hours, 22 minutes and 57 seconds.

The previous weekend Henley Dragons, boosted from receiving the Premier and Youth GB team mates back into the crew, competed in their last race of the BDA series at Surrey Docks, where Typhoon Dragon were the hosts.

The racing schedule consisted of 200m and 400m sprints in a jam-packed day.

Henley won their first race of the day against Notts Anaconda and progressed through the semi-finals into the major final against Typhoon and Wraysbury. In the final Henley stayed in contention throughout the whole race but eventually finished third. Henley ladies teamed up with Bristol ladies to form a composite team called West Country Beauties and despite no training together, came fourth out of 12 teams. The Burners youth team did themselves proud once again by finishing first.

The afternoon races consisted of the longer 400m sprints. Due to the overrunning schedule, it was decided to scrap the heats and go straight from first round into semi-finals then finals. The Henley crew made it through to the grand final where they faced Wraysbury and Typhoon once again.

Henley now look forward to the Nationals in Nottingham at the end of the month.