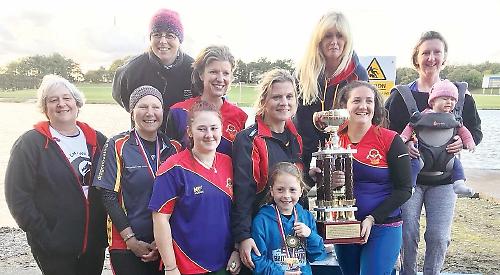 Henley joined forces with Pershore and Bristol for the mixed, ladies’, senior and junior races. The open category consisted of all Henley paddlers. The first day’s racing was the 200m and 2km distances. After the heats Henley stormed through into the major final in all categories.

The 2km race was a different type of spectacle as all boats were to be set off 10 seconds apart depending on their finishing time in the 200m contest. The course consisted of three turns, which Henley’s helm manoeuvred the boat around with skill.

Henley’s open team started second from last so were hunting down Wraysbury but were ahead of Amathus. Numerous overtaking opportunities were executed of slower crews as they followed Wraysbury around the course. Henley retained this position, keeping Amathus at bay to finish in third place. The second day consisted of 500m races in all categories. Again a successful collection of awards was achieved across the categories with the ladies and juniors picking up gold, fourth place for the mixed boat, bronze in the open and silver in the seniors.

Henley now look forward to hosting the 7km winter series event over the coming months, the first of which takes place on November 4.