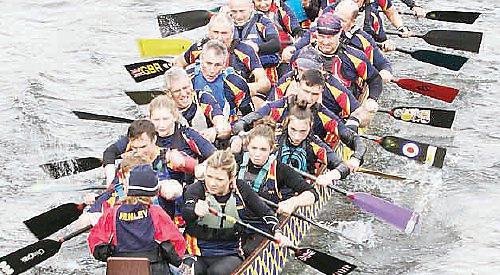 HENLEY Dragons launched into their first race of the Henley Winter Series where they welcomed nine dragon boats and 10 outrigger canoes to compete in the 7km race.

A memorial was held before the race to commemorate Alistair Collier, a keen paddler who sadly lost his life competing in Dorset last month.

Every 40 seconds crews were set off in this pursuit race from the Eyot Centre, under the bridge down to Temple Island, back upstream, up to the top island and back to the Eyot Centre.

Henley set off in fifth position in pursuit of Bristol Empire Dragons and Pershore Phoenix. Henley gained on Bristol with every stroke downstream towards Temple Island, turning efficiently and effectively to begin their pursuit back upstream.

The helm called a few drives to narrow the gap between the two crews. Bristol Empire gained speed back upstream, overtaking Pershore and hunting down teams further ahead.

Henley, pursuing Pershore, approached them and Thames at speed before 50m out from the last turn gave Henley right of way. Henley’s helm Wayne Jones negotiated an epic tight turn which not only secured them overtaking Thames and Pershore Phoenix, but also gave them a boat length on them both.

The winning outrigger canoe was OCUK Men who completed the race in 32:39 and second Paddlesports Racing Canoe Club Men 33:39.

The second races of the series take place at Henley this Sunday at 10.30am.