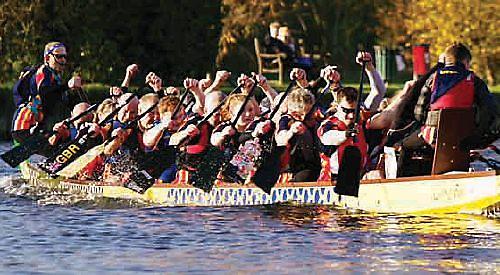 Henley welcomed 10 dragon boats and six outrigger canoes to the Eyot Centre for what proved to be an exciting day’s racing.

Having been seeded based on the completion of the first Henley winter series race, the slowest teams were let off first, with an interval of 30 seconds between crews. Henley started off in seventh place, behind Pink Champagne, Raging Dragons, Hurricanes, Exe-Calibre, Typhoon and Secklow. Henley were due to be chased by Bristol Empire, Wraysbury and Rafters.

From the start Henley took off confidently, picking up speed as they crossed the start line. They soon settled into their stroke, with the helm calling for long strong strokes. Navigating under the bridge, Henley went hunting down Exe-Calibre, Secklow and Raging Dragons downstream towards Temple Island.

As Henley gained with every stroke, they strategically followed behind so they could sling shot them both out the corner. Henley tucked in, and when out of the bend were faced with Exe-Calibre, Secklow and Raging Dragons fighting it out ahead of them.

With four dragon boats abreast jostling for position, the wash from each boat was dragging the other one back, creating swirls and a battle for space as each boat tried to surge ahead.

Henley, reading the river flow and competition from the other crews, opted towards the bankside of the river, out of the wind, and out of trouble. With long, strong strokes they overtook the three competing it out alongside them, taking a seat, stroke by stroke.

Rafters, the team usually victorious in the series, gained on Henley with the deafening drummer’s beat, overtaking them as they came back towards Phyllis Court. Henley tried to use them and keep with them, which they achieved under the bridge and up towards Eyot Island which is where Rafters engaged another gear and disappeared ahead.

Henley had clean water navigating this last turn, sprinting out the turn into a very strong drive for the finish. Henley finished third with a time of 34 minutes, one second, with Wraysbury runners-up with 33 minutes, 37 seconds and Rafters first in a time of 31 minutes, 18 seconds.

The third winter series race will take place on December 9 at 10.30am.