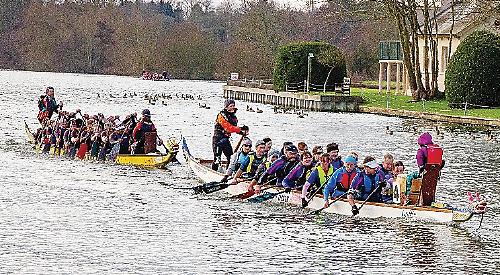 The race started at the top island near Marsh Lock, travelling downstream, with crews being released every 45 seconds with the slowest being set off first.

Crews gathered speed before they crossed the start line in front of the Eyot Centre. From here the pursuit kicks off downstream to Temple Island for a racing turn heading back up stream. The crews assess their strategies in their fight back upstream, staying near the bank out the wind and flow, forcing faster crews into the stream if they are attempting to overtake. The crews pass back under Henley bridge up to the top turn and back to Eyot.

Henley Dragons had a quick start, gathering speed to 13kmph by the time they reached the Eyot Centre and were soon closing the gap between themselves and Secklow 100 from Milton Keynes.

Henley caught Kingston Dragons, who started ahead of Secklow by the corner of Temple Island, nipping tightly into the turn, and pulling away upstream. Motivating and strategic calls were made to pull on the strength of the paddlers and to keep all focused on the job in hand as they headed back upstream.

The outriggers also had a good race with their own battles on route. These sea going vessels showed their worth in the windy conditions that were steered well down the Thames. Paddlesports men finished first in a time of 34 minutes, six seconds, a newcomer to the series was second place West Country Waka in a time of 35 minutes, 15 seconds and third was Royal Outrigger Canoe Club in 36 minutes, 30 seconds.

The last winter series event will take place at Henley on January 27.