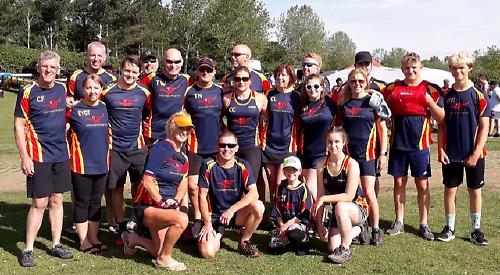 HENLEY Dragons had mixed fortunes in their latest round of races at Milton Keynes on Sunday hosted by Secklow 100.

Henley, fielding a crew of 18 paddlers, began their first 200m race against Typhoon Too, Preston Dragons and Wraysbury.

Under warm sunshine, Henley didn’t shine themselves as they were pipped to the posts by Wraysbury. Having not been a fastest loser, Henley then competed in the repechages to secure their place in the semis and finals.

After battling it out and winning against Preston and St Neots in the repechage, Henley found themselves in the minor final against Raging Dragons, Secklow and Windy Pandas. To ensure points, Henley needed to put on a strong performance but came fourth in this battle.

As the racing schedule fell behind, the semi finals were scrapped whilst Henley were out on the water warming up. The semi finals turned into a two race final instead. Having not had the opportunity to reject the two race option as conditions could change between races, Victorious Secrets raced with increasing cross winds, which affected the times for all boats in their race. The other final race was unaffected, so their times were quicker overall, so Victorious Secrets came fifth in a time of one minute and 3.47 seconds.

After lunch, Henley Dragons then faced the 470m races. Henley battled through their first heat coming second against Secklow, Bristol and Typhoon Too. The time and position in this race led Henley into another repechage against Windy Pandas and Typhoon Too which Henley successfully won.

In the semi final, Henley were up against stiff competition from Secklow, Notts Anaconda and Cambridgeshire Royals. Aiming to stave off Cambridge, Henley’s powerful start found them competing not with them, but with the hosts Secklow 100 who were alongside them. Secklow made off but seat by seat, Henley fought back to a surprised Secklow. It was a fine fight, one which was narrowly lost, but saw Henley finish seven seconds quicker in this race than their previous repechage time.

Lacking in focus and that competitive edge in the minor final, Henley lost to Amathus and rival Bristol but pipped Cambridgeshire Royals to the line.

Henley are in action again on Sunday in Liverpool.