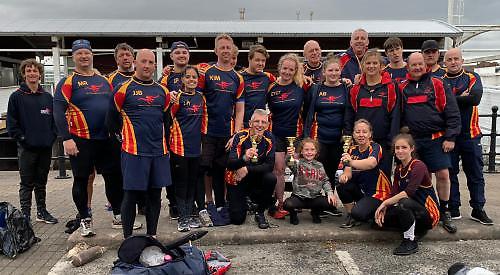 HENLEY Dragons gained success in the latest round of BDA races held in Liverpool.

Amathus were the hosts, welcoming crews to compete in the 350m, 2.5km and a new event to the schedule, the 500m slalom. With clubs such as Secklow and Typhoon not competing, Henley had the opportunity to get some much needed points in the league.

The first race was the 350m against Wraysbury, Preston, and Liverpool/Windermere. Henley shot off at the start and through the transition were strong and in contention with Wraysbury. Henley were paddling strongly but in the last 50m Wraysbury surged ahead and pipped Henley to the post. Henley’s quick time meant they were straight through to the semi finals.

Over lunch Victorious Secrets the composite team (Bristol and Henley ladies) were up next in their 350m races. In their first race they raced St Neots and Liverpool/Windermere. Victorious Secrets triumphed by just over one boat length, securing themselves straight into the final.

Henley were next up in the semi finals against Amathus and Preston. This was a close race but Henley crossed the line fractionally ahead of the hosts Amathus to secure a place in the final.

The final was against Amathus, Notts Anaconda and Burner Dragons. Alice Burnish held the crew well on the line before setting off strongly. Henley were quick out the blocks and settled into their race with long, strong strokes.

Alongside them were Amathus and Notts Anaconda in what was a tight race. Holding on and keeping strong, Henley pushed hard without losing technique. There was nothing between Notts Anaconda and Henley, so it went to a photo finish which went in the favour of Victorious Secrets by a dragon’s nose ahead of Notts Anaconda.

It was now Henley’s turn to perform in the 350m final against Notts Anaconda, Amathus and Wraysbury. In what was a close race, there was little between the crews and there was a photo finish between Henley and Amathus, but this time Henley were not so lucky, finishing fourth. Wraysbury came first with Notts Anaconda just behind them in second.

Next up was the 2.5km pursuit race. Ranked by the 350m race times, the slowest crews started first. Henley set off behind Cambridgeshire Royals but ahead of Amathus, Notts Anaconda and Wraysbury.

Every 20 seconds a crew was released onto the 2.5km course which consisted of three tight turns.

Wayne Jones executed the turns effectively as Henley stormed past Cambridgeshire Royals before the second turn, and with the powerful crew and effective turns, they then hunted down Bristol coming alongside but they held Henley off. Henley’s time put them in third place.

Last race of the day was the 500m slalom, a format unknown to crews before the day. Crews set off 30 seconds apart to complete three turns and were against the clock.

Henley’s helm Jones, with the help of the strong crew, negotiated all the corners tightly without losing much power, motoring home in third place behind Wraysbury and Notts Anaconda.

Henley Dragons are back in action on Sunday at London Docks.