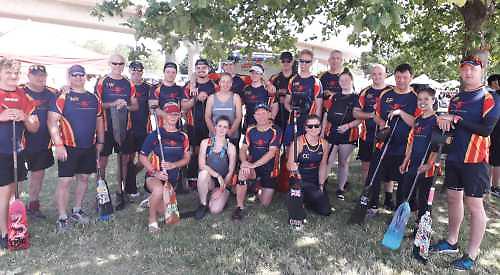 HENLEY Dragons picked up a fourth place finish on Sunday at the London Dragon Boat Festival held in the Royal Docks alongside City Airport.

British Dragonboat Association (BDA) crews from around the country competed in a 1km pursuit race followed on by racing amongst Corporate Festival Teams who were to undertake 200m six lane races.

The event was a huge Chinese festival of all things dragonboat racing organised by the Chinese government. The day started with the 1km pursuit race which consisted of three heats. Henley competed initially against Typhoon Too, Kingston Pretenders, Amathus Bees, Raging Dragons, Preston Dragons, St Neots and Amathus in this pursuit race.

Henley were to set off second from last with St Neots ahead of them and Amathus behind hunting them down. Henley set out with a strong start, aided by the wind. As they approached the turn, Henley tucked in behind and demonstrated a tight turn making up a boat length on St Neots as they faced the return 500m into the headwind.

Seat by seat, Henley ate into the 20 second advantage and with conviction, Henley overtook St Neots in a very strong finish. Henley came second in their heat behind Typhoon.

Henley’s first 200m heat saw them against Typhoon, Exe Calibre, Dublin Vikings and Pink Champagne. On home water, Typhoon were shot off the line. Henley gave a good account of themselves and finished in second place.

In the second round Henley were against Kingston, Pink Champagne, Typhoon and Notts Anaconda. This was a thrilling race, with Henley managing to improve their time by one second over this distance.

Due to the races falling behind schedule teams saw their third 200m heat and semi finals being cancelled as a result to recoup time. After a long wait in the heat and following the cancellations, Henley were in the six lane final against Typhoon, Secklow, Wraysbury, Raging Dragons and Notts Anaconda.

Henley set off the blocks quickly, alongside Wraysbury. It was a close race, with less than a second separating the top teams. Henley fought hard at the finish, coming in fourth ahead of Raging Dragons and Notts Anaconda.

Henley are next in action at Nottingham on July 14.