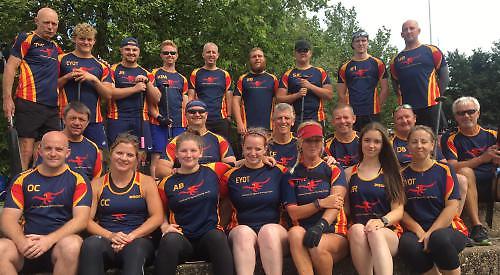 HENLEY Dragons reached the final of the 200m sprint race at the Nottingham Regatta in the BDA (British Dragon Boat) races that also consisted a 2.1km pursuit race.

Henley were up in the first heat against Amathus and Amathus Bees. An exciting start led to Henley pipping Amathus to the post by 0.26 of a second — Henley, with a time of 49.85 seconds to Amathus’ 50.11. This result put Henley through to the semi-finals where they were to face Powerhouse, Secklow and Typhoon. Over lunchtime, the juniors and ladies were up to face other crews over the same 200m course.

Henley ladies normally pair up with Bristol ladies to field a composite team called Victorious Secrets, but as Bristol were not able to be there as they lacked paddler numbers, Henley paired up with St Neots ladies.

The St Neots/Henley composite raced Preston Dragons and Secklow Hundred. Having not trained together, they put on a strong performance beating Secklow Hundred by 0.13 of a second to take first place. They were then to race in the semi-finals against Secklow, Notts Anaconda and Pershore. On home waters, Notts Anaconda were looking strong, and with the aid of some Powerhouse ladies, they pipped St Neots/Henley to the post. In the finals Henley/St Neots came home in second place behind Notts Anaconda who received a one second time penalty for having unregistered paddlers in their boat. The youth team came home in a quicker time by three seconds.

In the semi-finals Henley Dragons faced Powerhouse, Secklow and Typhoon as they tried to secure a place in the four-lane final. Henley set off strongly and transitioned into a strong race pace to secure a place in the final as they finished second in time of 50.27 seconds behind Secklow who won in 49.28. Powerhouse were third in a time of 53.20. The whole race felt strong, and the team clicked together as one as they battled for the line. They had given everything. They were through to the four lane race final.

In the final Henley set off strong, transitioned into the powerful race pace and kept with their opposition to eventually finish in fourth place. Secklow triumphed with Wraysbury second and Notts Anaconda third.

Following the 200m final, the last race of the day was the 2.1km pursuit race where every 25 seconds a team would be released onto the course. Henley, finishing the 200m in fourth spot, meant they were to be chased by the faster teams of Notts Anaconda, Secklow and Wraysbury. The race consisted of three three one buoy corners, negotiating under the bridges and around the bridge stanchions.

Henley set off sharply, channelling under the first bridge and approaching the first buoy turn at speed. A little wide, Henley shot out the corner with a race start, focusing all their efforts on Amathus ahead of them.

After a pursuit along the straights and tactical cornering, Henley nipped Amathus to fourth place by 0.23 of a second — Amathus finishing in 10 minutes 34.44 seconds to Henley’s 10 minutes, 34.27 seconds.