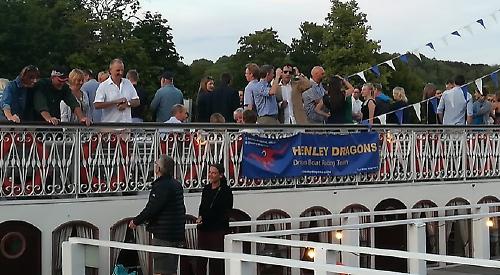 THE Henley Dragons held a summer evening river cruise in support of the Eyot Centre.

A raffle with prizes donated by local businesses was held with the proceeds going towards new equipment at the centre off Wargave Road.

The Dragons compete in a national league against teams from across the country.

In order to do this, we try to raise funds for the centre so that we can compete to such a high standard. All racing costs, including travel, are at each member’s own expense.

We have dedicated coaches across the three areas of the centre, namely the canoe section, Duke of Edinburgh’s Award and the Henley Dragons.

The coaches put their all into preparing the Henley team for racing and you may have seen us training on the river in Henley on Thursdays and Sundays.

Last year, 10 members competed internationally, representing Team GB in Germany, and two of them went on to compete in the world cup in China. This month, four members will be competing at the world championships in Thailand.

At the end of last season, the Dragons finished second in the national league and we would like continue this momentum by attracting new members into the sport.

The Duke of Edinburgh’s Award section continues to welcome young people and the canoe section welcomes paddlers weekly to master their skills.

We would like to thank Hobbs of Henley for its continued support.