Dragons finally allowed back on the water 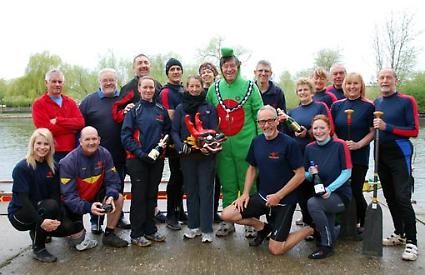 A BOATING club celebrated getting back on the River Thames after three months out of action due to the floods.

The Mayor, who wore a dragon onesie for the occasion, said: “They put both of us on light duties so it was quite a pleasant experience. They seem to have an awful lot of fun.”

The Mayoress added: “It was something I had wanted to do for a long time. They are a great bunch of people and they have got a wonderful club there.”

She said she hoped to return to the club, this time taking on the role of drummer at the front of the boat. Club spokesman David Buckland said the group was now preparing for the new season after the long lay-off.