Soft mud is great for ploughing people but not spectators 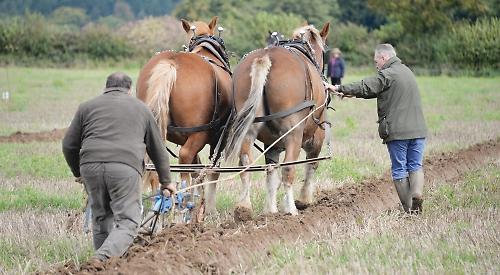 TRACTORS of all shapes and sizes competed in the 126th annual Henley ploughing match on Sunday.

About 1,000 people attended the event, which is organised by the Henley and District Agricultural Association,and took place at Bishopsland in Dunsden, which is owned by the Phillimore estate.

Rain in the days beforehand meant visitors had to negotiate the mud but the ground was softer for the 40-plus entrants.

The day began with the traditional blessing of the plough by Rev Stephen Cousins, the association’s chaplain, before the competitiors began ploughing designated plots.

They were judged on criteria such as straightness of their furrows, uniformity and “burying the track”, which means ploughing over marks left by the wheels of their tractor.

Other attractions at the event included displays by working heavy horses and demonstrations of logging and dray-pulling, a dog show and ferret and terrier racing. There was also a working machinery display and a poultry auction.

Association manager Jo Taylor said: “In spite of the very muddy conditions and unpredictable weather, we had a relatively good crowd. I’ve had lots of nice feedback from people thanking us for the day.” The full results were as follows:

The Martyn Arbib Perpetual Cup for the best two hectares

Ron Vines Cup for best work done by a ploughman or woman aged 17 to 20: Aiden Greenaway.

The Drewitt Memorial Cup for the best opening: Peter Eldred

The Mick Hunt Cup for the best finish: Gordon Harmer.

The Ewelme Perpetual Cup for the champion ploughman in the association area: Gordon Harmer.