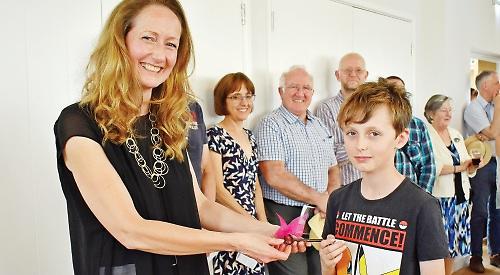 VILLAGERS celebrated the completion of a £400,000 refurbishment at Eye and Dunsden village hall.

The building, which has been undergoing an extensive overhaul for the past four years, was officially re-opened by South Oxfordshire District Council chairwoman Jeannette Matelot.

It now has a single entryway serving both the main hall, which has been extended by about 40 per cent so it can seat up to 90 people, and the smaller Palmer Room.

Both have new hardwood flooring with underfloor heating and the walls and ceilings have been repainted. The hall has new toilets and lighting, solar panels on the roof and a new kitchen in the main hall.

There are plans to upgrade the smaller kitchen next to the Palmer Room and to improve the grounds.

The work was carried out by contractor 2M, of Woodcote, while Peppard Building Supplies provided materials at cost price.

The work started in 2014 and was carried out in stages so the building didn’t have to close.

It was funded by a £200,000 grant from the district council, a £100,000 donation from the Phillimore Trust, money from Eye and Dunsden Parish Council and dozens of private donations.

Scores of people attended the ribbon-cutting ceremony, including regular users, supporters and members of the hall’s management committee as well as Henley MP John Howell.

They enjoyed tea, cakes and biscuits as well as sparkling wine and Wilfred’s Mild, a limited-edition ale brewed by Loddon Brewery in Dunsden and named after First World War poet Wilfred Owen, who served as rector’s assistant in the village from 1911 until 1913.

He also taught at the village school in what is now the Palmer Room, which was built in 1846 before the main hall was added in 1869. The school shut in 1973 and the parish council bought it in 1977.

A plaster bust of Owen and a sculpture depicting his soldier’s cap, medal and service revolver were unveiled by Mr Howell and 94-year-old Jean Eastwood, of War Memorial Place, Henley, who was first to research the village’s connections to the poet and helped to launch the Dunsden Owen Association.

The artworks were made and donated by sculptor Anthony Padgett, from Lancashire. Mr Padgett read aloud two of Owen’s works called The Letter and The Last Laugh, which depict a soldier’s life in the trenches and eventual death from enemy gunfire.

Pianist Jeremy Boughton, director of music at Dorchester Abbey, then performed a six-minute piece called the Red Kite which was specially composed for the occasion by David Breeze, from Wokingham.

There was also an exhibition of wildlife photographs by Bill Pound, 69, who was born in the village, attended the old school and lived in the area until he moved to Norfolk aged 60.

Mrs Lee gave a short speech of thanks and presented a key to her 11-year-old son Jenson to symbolise the hall’s benefits for future generations.

She said: “I’m absolutely overwhelmed by how great it is. The contractors have done an incredible job and really went the extra mile, working evenings and weekends to get it done. It’s beautiful and has exceeded all expectations.

“Our feedback has been pretty darn good and the increase in bookings has been a reflection of that. We’ve got wedding receptions as far ahead as 2020 and the exercise groups really appreciate the heated floors.”

Parish council chairman David Woodward said: “This is a major rebuild and the most significant work that has ever been carried out on the building. It has completely transformed and future-proofed it and it’s proving very popular.”

Mrs Eastwood, a former English teacher at Chiltern Edge School in Sonning Common, said: “I taught Owen’s poetry and was surprised when I moved to the village that hardly anyone knew about the connection. I think this is a very fitting tribute to his life.”

Councillor Matelot said: “I feel very proud to have opened this project as it’s exactly the kind of thing we wish to support through grants.

“Our panel agreed the funding unanimously and were impressed with the efforts that were made to match it. It might well be the best I’ve seen yet.”