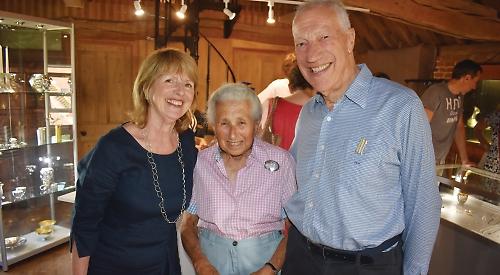 A SCHOOL of excellence in silversmithing and jewellery manufacture has celebrated its 25th anniversary.

The Bishopsland Educational Trust postgraduate training workshop in Dunsden staged an exhibition of pieces called Celebrating the Present and the Future at the weekend to mark the occasion.

The show featured the work of its most recent graduates, Abbey Asher, Naomi Scott, Esme Tanner, Takuya Kamiyama and Yirong Zhu, and that of 25 fellows of Bishopsland, all of which were for sale.

Penelope and Oliver Makower established Bishopsland as a charity in 1993 and over the following 25 years have helped more than 180 emerging silversmiths and jewellers to develop the skills they need to turn their talent into a career.

Silversmiths and jewellers spend one year, and sometimes two, living and working at the workshops before going on to establish their professional career or taking a second degree.

Forty Bishopsland graduates have been accepted for an MA, 30 at the Royal College of Art, and more than three-quareters of those who have attended the course since its inception are still working in the field of silversmithing and jewellery. The trust provides bursaries for those unable to finance a place on the specialist residential course.

Glyn McIntosh, director of finance and administration at Bishopsland, said the exhibition was a success.

“We had lots of visitors and people with an interest in contemporary silver,” she said. “It was also an important experience for the gang so they learn how to sell and  promote their work because when they leave most of them want to become self-employed makers.

“The experience they get here is really important for their future careers.

“Penelope and Oliver feel it’s very important to support people throughout their careers. When the students leave Bishopsland it’s not a question of ‘goodbye’, it’s ‘how can we carry on supporting you?’

“One of the ways is to invite them to display at the exhibitions we have.

“Bishopsland doesn’t turn anyone away. If they can’t afford to come and they are talented enough, we offer them bursary support.”

Mrs McIntosh said the trust was optimistic about the future and would welcome its biggest intake of 14 students in September.

In June 2013, Bishopsland was recognised at the Craft Skills Awards when it received the Encouraging Craft Skills in Education prize from Prince Charles.

Mr Makower won the Henley town medal in 2012 for his work promoting the town’s young people.