Head brewer retires... but will return for few more pints 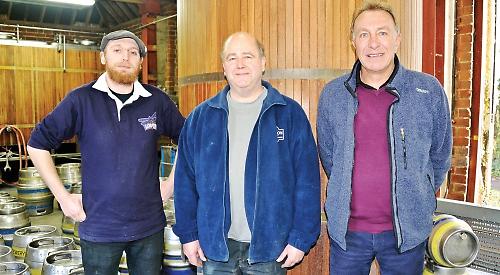 THE head brewer at the Loddon Brewery in Dunsden has retired after more than 15 years’ service.

Steve Brown joined the business when it began in early 2003 as he had previously worked with founder Chris Hearn at the Brakspear brewery in Henley before it closed the year before.

He is thought to have brewed about 17 million pints of Loddon ales and has been credited for the 58 awards the company has won.

Mr Brown, 60, has stepped down due to the physical demands of the role but says he is looking forward to coming back to do a few weeks’ holiday cover every year.

He has spent the past month training his successor Jake Bartleet-Perry, 27, who has moved down from Bradford to take over.

Mr Brown, from Twyford, was thanked for his service by Mr Hearn and his wife Vanessa, who run the business, in a promotional video which they posted on Twitter on his final morning on Friday.

The film shows him sorting hops, driving barrels of beer on a fork-lift truck and hosing down the yard at the company’s premises off Church Lane.

Mr Brown first worked in a brewery as a holiday job while studying for a chemistry degree at the University of Sussex in Brighton in the Seventies.

His first full-time job was at Brakspear, where he obtained a City and Guilds qualification in brewing. He said: “I’ve had 15 absolutely fabulous years here but the job needs you to be on your feet and I’m just getting a bit old for it.

“The brewery is well laid-out and equipped and everything has always run so smoothly.

“It’s a family business and when you work here you feel like you’re part of the family. Part of me will be sad to leave but it was all getting a bit much and it’ll be nice just to do it for a few weeks of the year.”

Mr Hearn said: “I’ve brewed with Steve since the Seventies and he has been with us since day one so we’re sad to see him go but we understand his reasons as it’s an incredibly physical job. He is a lovely, trustworthy and hard-working man who has been absolutely fundamental in our success and we’re glad that we’ll be able to stay in touch with him.”

Mr Bartleet-Perry said: “I’ve enjoyed my first month here as both the kit and the team are amazing and I couldn’t ask for a more beautiful place to be working.”