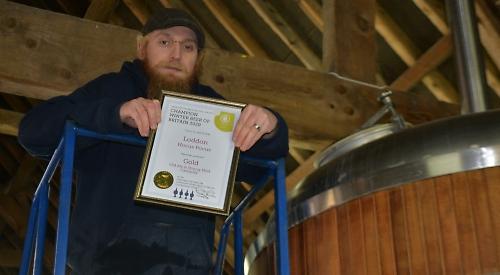 A BREWERY boss has celebrated winning a beer award only months after recovering from being seriously ill.

Chris Hearn, who founded the Loddon Brewery in Church Lane, Dunsden, with his wife Vanessa, said he was delighted.

The brewery was awarded gold at the Champion Winter Beer of Britain Awards for its traditional dark ale Hocus Pocus.

The beer will automatically qualify for the British Beer Festival in August and have the chance to be crowned the best in the country. Mr Hearn, 62, from Benson, was suffering with septicaemia, meningitis and pneumonia in May last year and was in a coma at the John Radcliffe Hospital in Oxford for three weeks. He has been left deaf as a result of his illness.

Mr Hearn said: “It’s the biggest award we’ve ever won and I want to give full credit to everyone involved.

“It has obviously been a very challenging year for me personally, so winning this award feels even sweeter.”

His son Dan, 35, who is the company’s marketing manager, said: “Dad was in hospital for about two months in total.

“He very nearly died and the whole brewery was thrown into disarray.

“ To win this award, given how difficult the last year has been, is incredible. It is a hugely positive end to a horrible year.” Mr Hearn jnr and his brother Luke, 33, who is the company’s sales manager, attended the awards ceremony in Birmingham, which was organised by the Campaign for Real Ale.

Hocus Pocus, which was one of nine finalists, was devised by Loddon’s former head brewer Steve Brown, who retired in December 2018 after more than 15 years at the brewery.

It is brewed using goldings and fuggle hops, pale and dark malts and a small amount of sugar. The brewing process takes four weeks and each batch produces 5,760 pints.

Jake Bartleet-Perry, who is now head brewer, said: “The name comes from a Danish band called Focus. They do lots of yodelling over the top of progressive rock music, which is not my type of music.

“Steve was the head brewer from the day we opened and we have been brewing Hocus Pocus for 16 years.

“The original recipe has been modified only slightly in all that time. The secret to brewing is 50 per cent science and 50 per cent creativity.

“It is a beer that I really enjoy. It is actually the first beer that I brewed when I started working here under the supervision of Steve, so it is quite nice to have won an award for it. It was a complete surprise.”

Mr Bartleet-Perry was unable to attend the ceremony as he was ill.