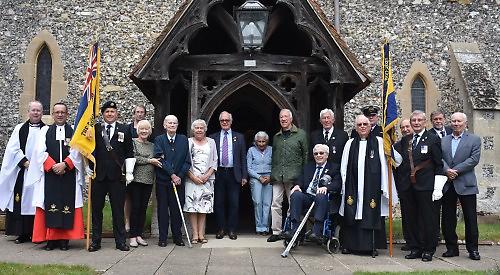 FORTY people attended a church service to celebrate the 100th anniversary of the Shiplake and Dunsden branch of the Royal British Legion.

Sunday’s service was held at St Peter & St Paul’s Church in Shiplake and was organised by Rosemary Jones, the branch’s honorary secretary.

Rev Robert Thewsey, rector of the Shiplake, Harpsden and Dunsden Benefice, led the service, which had multiple readings from members of the branch.

“That was quite the feather in our cap,” said Mrs Jones.

Four young cadets from Shiplake College attended the service along with Grant Lawson, the college’s Contingent Commander of the Combined Cadet Force. Also in attendance was Peter Eldridge, chairman of the Oxfordshire Royal British Legion, who presented the branch with a framed certificate for reaching 100 years of “unbroken service”. Mrs Jones, who is also the branch’s Poppy Appeal organiser, said: “It was hugely successful and everybody that was there said they really enjoyed the service. It just hit the right note and couldn’t have gone better. It was eveything I had hoped for as I spent a lot of time organising it.”