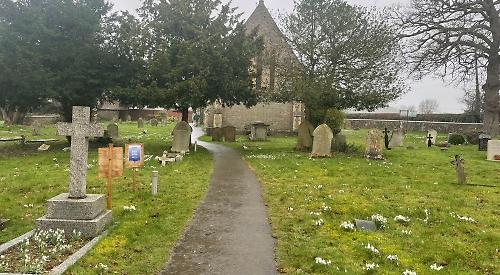 THE snowdrops at All Saints’ Church in Dunsden were blessed in a special ceremony on Sunday.

Despite the stormy weather, about 150 people visited the church for the service, which was led by assistant curate Sarah Nesbitt.

She blessed the flowers at the entrance to the church and said: “The snowdrops are all in bloom despite the weather and we are all cosy in this beautiful church.

“Today’s service and afternoon has been created with the snowdrops and the whole creation in mind and I just want to say a huge thank-you to everyone who has made it possible.

“We want to pray for the creation and for our commitment to taking care of it.

“We really need to think about our footprint and about the future as nature was given to us as a gift.

“We need to do more to take care of it because I don’t think we are doing so at the moment.” John Bodman, who has spent the past decade planting snowdrop bulbs in the churchyard, said this was the sixth year of the event.

“Visitors were able to see different varieties for snowdrops,” he said. “We do hope that everyone enjoyed it.

“It was a more relaxed service which included poems and readings as well as an afternoon of entertainment, which is quite different from what we have done before.”

After the service, refreshments including tea, mulled wine, coffee and home-made croissants were served.

There was also a raffle, talks about the history and meaning of snowdrops and performances by local pianists and violinists and the Shiplake bell ringers.

Visitors were given tours of the church and its grounds, including the graves of the parents and sister of First World War poet Wilfred Owen, who was assistant to the vicar at the church.

Owen was killed in action in France on November 4, 1918, a week before the signing of the Armistice. He was 25.

A stained-glass window at the church is dedicated to him and some of his poems were read aloud as part of Sunday’s event.

The event raised £512 for a new Nativity set for the church.