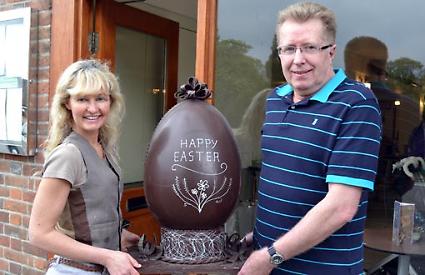 A WOMAN won a giant chocolate Easter egg in a charity raffle after visiting Henley — and then gave it back to raise more money.

Sharon Leyden, a chef from Todmorden in West Yorkshire, was in the town while visiting her daughter Jess, a Team GB rower who trains at Caversham Lakes.

She popped into the Chocolate Café in Thames Side, where the 8kg was being raffled, and bought a £1 ticket.

However, she had returned home before the draw was made on Easter Sunday and the café had to track her down by phone to tell her she had won.

Ms Leyden, 55, said: “I can’t believe I won. I had told the café I’d like to see them try to get it to me in Yorkshire so when they rang me up to say I’d won I thought they were joking. I’ve never won anything before so it was really nice.”