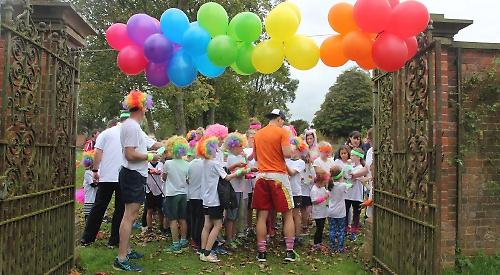 The children were joined by their families at the fund-raising event, which was organised by the Friends of Nettlebed School.

After a warm-up by children’s entertainer Bertie Slippers, whose daughter attends the school, the 88 participants had to run laps of a 1km course that took in the grounds of the Sue Ryder hospice and the school’s walled garden.

They also had to go through “Bubble Alley” and, on the final loop of each lap, were squirted with coloured powder made from dyed corn starch. Organiser Georgina Chapman said: “This caused much hilarity and some very colourful runners.”

The longest distance achieved by a runner was 11km while many of the younger participants completed about 5km.

Everyone who took part was given a white T-shirt to wear while running and a medal at the end in return for their entry fee.

Mrs Chapman said: “The children did amazingly well and raised a fabulous amount for the school.

“Events like this can’t happen without the support of the community and local businesses and the Friends of Nettlebed School would like to thank Henley Self-Storage, who sponsored the colour orange, as well as all those who volunteered time and effort to make this a very special event.

“There have been many requests to make this an annual fun run — watch this space!”