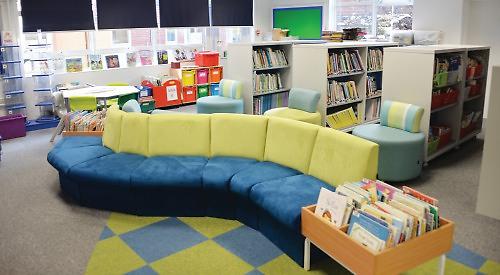 A NEW £230,000 library extension at Sonning Primary School has been officially opened.

The ribbon-cutting ceremony was carried out on Friday by the Rev Jamie Taylor, rector of St Andrew’s Church in Sonning, with the help of pupils Olivia West and Jack Richards.

The rest of the school watched and then cheered and applauded as the blue and pink ribbon broke. The extension, which also accommodates staff rooms, took nine months to build.

The library, which pupils have been using since September includes bookshelves, tables, chairs, a computer suite, electronic whiteboards and a comfortable seating area.

The work also included a new school entrance and new fencing around the school grounds in Liguge Way.

The diocese of Oxford donated £189,000 towards the project and the parent teacher association gave £10,000 while the rest came from private donors and Sonning Scarecrows, the scarecrow trail held in the village every two years.

Headteacher Luke Henderson thanked everyone who had donated as well as the architect Martin Shaw and contractor Thames Ceilings.

He also paid paid tribute to the staff and his predecessor Lesley Green, who spent several years putting the plans in place.

Mr Henderson said: “The work took a bit longer then we had hoped and it cost more than we had planned but it has been an extraordinary effort. Most of the money has come from the diocese and without them this project would not have got off the ground.

“We now have a library and computer space which can be used for small group work and after-school clubs. We have a space to sit, read and develop a love of reading. The children have loved using it since it opened in September. They use it for all sorts of things.”

Mrs Baker said: “It gives the children a proper reading space and a dedicated space where teachers can run breakout groups.

“Before, the library was in a hall and there were chairs all over the place. We did not have a quiet area where the children could go to hear someone read.

“We’re very proud with what we have managed to do.”

Rev Taylor, who is a school governor, said: “It’s great to be here today and it’s an honour to be asked to cut the ribbon.

“Nine years ago I remember getting a lovely welcome to the school but the entrance left a bit to be desired and needed a bit of work.

“It’s great to see the impression given by this wonderful new reception area.

“The new library is beautiful. Children who have not been born yet will benefit from these projects.”

After the ceremony members of the parent teacher association served tea and coffee and biscuits.