I paint rocks to cheer up other people, says girl in cancer fight 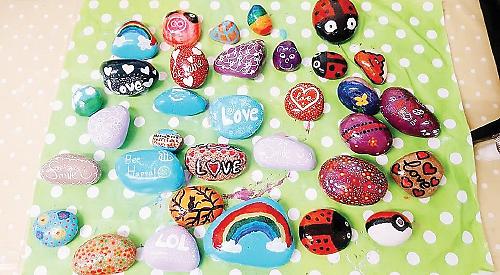 A GIRL who is fighting leukaemia has been decorating rocks and hiding them to cheer up people who find them.

Caitlin Donaldson was diagnosed with acute lymphoblastic leukaemia, a form of cancer that affects white blood cells, in September.

She has been undergoing chemotherapy at the John Radcliffe Hospital in Oxford, sometimes for weeks at a time. 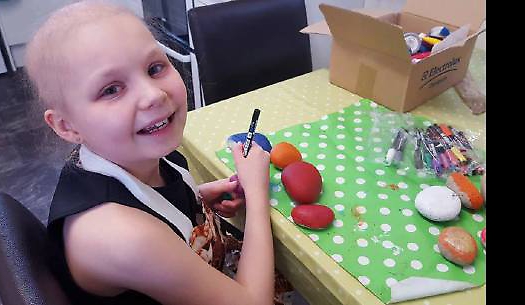 Caitlin, who lives in South Avenue, Henley, with her parents Nick Donaldson and Tammy Kelly and nine-year-old brother Lewis, came up with the idea of decorating rocks after seeing others doing it online.

The colourful images include flowers, a strawberry, a ladybird and Spiderman.

Caitlin has completed hundreds and hidden them in public places including Mill Meadows, Henley Bridge and the station.

She also set up a Facebook page called “Caitlin Rocks” so people can post a picture when they find a rock and this attracted more than 700 followers in a month. The finders are encouraged to hide the rock somewhere else for others to discover.

Caitlin’s mother says this has helped take her mind off her treatment.

Ms Kelly first took her daughter to the doctor last summer after becoming worried about how lacklustre she seemed.

She said: “Around the end of the holidays she just wasn’t herself. She was complaining of pains in her legs and at playdates she wasn’t joining in, which is very unlike her.

“We took her to the doctors and they said it was the warning signs of leukaemia. We went to the Royal Berks but were in and out a few times and no one could pinpoint what was going on.”

It wasn’t until they visited the John Radcliffe for more tests that it was confirmed that Caitlin had acute lymphoblastic leukaemia, which affects about one in every 1,750 children and has a five-year survival rate of 90 per cent.

Ms Kelly said: “It was awful when we were told. I assume it was in the very early stages and that’s why it hadn’t been showing in the tests.

“We had an inkling when we first went to the John Radcliffe because they gave us a car park pass for three months and the next day we found out the results.

“It was a shock but at the same time it was almost nice to know so we could get the treatment started.” Caitlin, a pupil at Badgemore Primary School, currently spends a week at the hospital for chemotherapy treatment followed by a week at home to rest.

She has been doing this for almost five months but her entire treatment programme is expected to take up to two-and-a-half years.

“The treatment has its side effects and she sometimes struggles to walk a little bit but overall we are surprised at how she’s handling it.

“To begin with we didn’t know how to explain it to her but the John Radcliffe gave us a book called Joe Has Leukaemia, which explains it in a way children can understand.

“She was fine reading it until she read the word ‘cancer’. That scared her a bit. But the type she has got gives her an 80 or 90 per cent chance.”

Earlier this year, the family spotted several social media posts about painted rocks being left in towns across the country and decided to take give it a go.

Ms Kelly has been buying bags of rocks from garden centres and the family paints them together at home.

She said: “It’s a craze that’s going around. Someone said it has taken over from fidget spinners. We thought we’d give it a little go and it has become very popular. We’ve done about 100 so far and have got more ready to go out. We’ve done all sorts of designs.

“Caitlin loves all sorts of crafts and she’s always doing something. The first thing we did after her most recent stay in hospital was to come home and the paint came out.

“We sat there for a few hours, which was nice. It’s mainly me, Caitlin and Lewis. Daddy hasn’t had a go yet but when the grandparents come round they do a few.”

Ms Kelly’s parents have painted 100 rocks which they have hidden in Loudwater, where they live, while others have been found in Marlow, Taplow and Dinton Pastures in Wokingham.

Family friends have hidden their own stones as far away as Scotland, Canada and Rome.

Mr Kelly said: “All the rocks have a message and a lot of people have joined the page after finding one. It’s nice to see people smiling when they find a rock and lots of others are painting their own.”

Dozens of local children have posted pictures of them smiling while holding a rock they have found while others have posted motivational messages. Caitlin, whose favourite design is of a pig called Pua from the Disney film Moana, said: “The best bit is seeing people happy when they find the rocks.”

The family have also set up a fund-raising page for children’s cancer charity CLIC Sargent, which has supported them during Caitlin’s treatment and the page has already raised more than £900.

Ms Kelly said: “We had always wanted to do fund-raising and this seemed a good way of getting the word out. CLIC Sargent have helped in various ways with things we didn’t know about.

“Caitlin gets disability living allowance and they helped with the forms for that when we weren’t thinking straight. There are also counsellors for the whole family and they fund nurses.

“Now that we have the fund-raising page Caitlin can’t wait to look and see who has donated.”