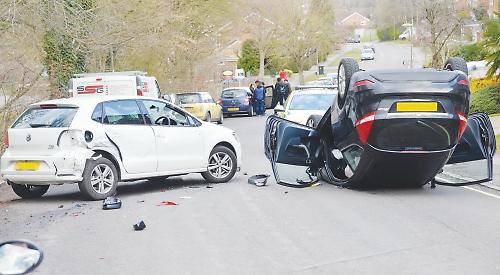 RESIDENTS of a Henley street have been urged to rent out their driveways to improve safety.

The suggestion was made by town councillor Sam Evans at a full council meeting following a series of incidents in Deanfield Road, near The Henley College.

In the latest incident a Ford Fiesta driven by a student overturned after colliding with two parked cars.

Residents claim that students drive dangerously and ignore the 30mph speed limit and park on the pavement while they are in college.

They have formed an action group which has called for a lower speed limit, more yellow lines and regular police patrols.

Mike Phelan, who lives in Deanfield Road, told the meeting that the street was unsafe due to the large number of cars parked there during the day, many of them belonging to students.

He said one of his neighbours refused to walk her daughter to Valley Road Primary School because she was so worried about the risk.

Mr Phelan said: “In the last month there have been three incidents outside my house where three cars have been written off and three taken away for repairs. Fortunately, no one was seriously hurt. One driver said they lost control at a roundabout.

“They park in incredibly stupid places, blocking junctions, and on the roundabout, causing other drivers to go into the opposite lane.

“We need a third police community support officer as the two we have are never available when we want them. The college principal has assured us she’s going to look into the matter and take what action she can but she’s very limited in what she can do.”

Richard Cartland, who formed the action group with Mr Phelan and fellow resident Nicola Gordon, said he saw a disabled man being forced to walk in the road due to the cars parked on the pavement.

He said: “I’ve lived down the road for 10 years and parking has always been a problem but the reason we formed the group was the dangerous driving. You will walk along with children and cars whizz past. Sooner or later somebody is going to get knocked over.

“It really brought it home to us all when we saw the car on its roof.

“People think of us as a bit ‘nimby’ but it’s the dangerous driving we want stopped. The college won’t take responsibility and there are no police in Deanfield Road. It’s a playground for some of the students.

“The back of one of the campuses is on Deanfield Road and that encourages students to drive between lessons. I must have seen the principal of the college 10 times but the college will not take responsibility for students outside the gates.

“The police have to come from Maidenhead, Reading and Didcot so the chance of them catching students driving dangerously is non-existent.”

Councillor Evans said that residents who are at work during the day could offer to let students use their drives in return for a small fee.

“I don’t know if that’s feasible but it’s a good starting point,” she said. “Can I suggest we don’t only talk to the college but one or two residents to come up with a solution? You live there and we don’t.”

Mr Phelan replied he knew of one student who had turned down the offer of a parking space from a resident, saying it was too far from the college and “would ruin her make-up if it was raining”.

Mr Cartland said: “Ideas are good but that is one of the less good ones. The five per cent of students who park and drive like idiots are the five per cent who won’t pay to park on our driveways.

“What we want is either some sensible traffic-calming solutions of speed limits and chicanes and parking restrictions so it’s not possible to drive a car in a way that will injure someone or for the police or the college to take responsibility. We know the college is there and we accept that. We know they are parking on our road and that’s fine but we don’t accept that it’s okay to drive or park dangerously. That’s how an accident is going to happen. I do believe someone is going to get killed.”

Mayor Kellie Hinton said she would speak to the college’s student union representatives.

She didn’t think residents renting out their drives would work, saying: “By the time students have been there for a couple of years and learned respect for the area they move on. A whole new batch come in who perhaps don’t know the rules.”

A college spokeswoman said: “On Tuesday the college held a positive initial meeting with the police, local council members and the Mayor to discuss how student cars impact on the existing parking problems in Henley. Further meetings are planned to explore possible solutions.

“The college actively promotes safe driving and respectful parking through its tutorial classes, attended by all college students.

“There are plans to enhance the programme by further engagement with the Government’s THINK campaign and distribution of a series of leaflets and posters around the college campuses in the coming weeks.

“The health and safety of our students is a priority and we are committed to equipping them with practical information on staying safe on the road and the rules on parking.”