The moor, the merrier 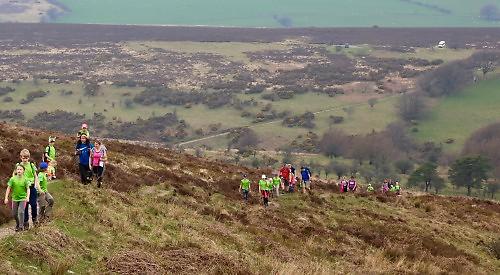 MORE than 70 children took part in an expedition on Exmoor and helped to raise more than £44,000 for charity.

The event was organised by the Children’s Challenge, a not-for-profit organisation set up in Shiplake last year, and 74 children and 64 adults took part.

It started on a Friday evening when the tents were pitched and the children were let loose in the woods to play in streams and on rope swings at the Pool Bridge campsite in Porlock.

After breakfast the next day the teams set off. Each course was marked so all the walkers made a 6km climb up to Dunkery Beacon, the highest point on Exmoor.

From here the teams split, with the 12km route undertaking a rocky descent to the north, while the 17km and 21km routes initially headed east to Webbers Post and Horner respectively. Organiser Stephen Lamacraft said: “All teams completed the circular routes, taking approximately eight hours to do so. What the children achieved should not be underestimated. A concerted eight-hour effort over rocky and hilly terrain in often blustery conditions is a considerable test of both endurance and willpower. Nobody quit.

“They were part of a body of children that raised more than £44,000 for charity. Their effort was outstanding. The purpose of the Children’s Challenge is to organise extremely challenging events for children to facilitate the raising of sponsorship for a charity of each team’s choice.”

The final Children’s Challenge event this year will be a cross-country relay to be held at the Culden Faw Estate near Henley on July 7. Teams of up to four children select a distance — 8km, 12km or 20km — and run alternate laps to complete the distance. All children are welcome.

The event is free to enter for all participants and spectators. The only criteria is that each individual raises a minimum of £25 for a charity of their choice via JustGiving and then links it to a team JustGiving page.