Independents show their worth 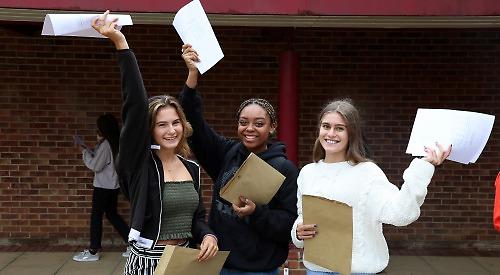 PUPILS at independent schools in the Henley area recorded a strong set of GCSE results.

At Shiplake College 89 per cent of students achieved passes at grade 4 or above.

Six pupils achieved at least eight results at grade 7 or above, the equivalent to A or A*.

Among them was Matthew Waller, from Dorchester, who was awarded an A* with distinction in further mathematics, making him one of the top-performing pupils in the country in the subject.

Jack Underwood, from Peppard Common, achieved three grade 9s, one 7 and three 5s as well as an A grade and two Bs.

He said: “I am very pleased with my results. Overall the exams went quite smoothly and it wasn’t crammed so much that it was unbearable.”

He will now study for A-levels in maths, geography and biology.

Michael Scanlon, from Knowl Hill, was awarded a grade 9 in drama as well as four 7s, two 6s and two 5s.

He needed a grade 7 in drama in order to win an A-level scholarship in the subject as well as taking psychology and biology.

He said: “I wasn’t expecting a 9 so I was really happy. The main thing I want to do in life is acting. I’m going to be looking at more professional work outside school and anything I can do to get more involved in the acting world.”

Headmaster Gregg Davies said: “I am very happy with this set of results following the reformed, tougher GCSE examinations. I am particularly pleased with the number of top 9 and 8 grades, the majority in mathematics, English and the sciences, including three students achieving two 9s in combined science.

“Whatever is said in the media, social or otherwise, this set of pupils nationally — and their teachers — have been the ‘guinea pigs’ for a new set of examinations.

“I, like many school leaders, have been appalled at the way certain changes to syllabi have been introduced.

“It says much about the character of our pupils and teachers that the results this year are, in the majority, very positive.

“This particular year group has demonstrated great courage and resilience during the examination period and I could not be prouder of them.”

The proportion of students achieving the equivalent of the old grades A* to C was 98 per cent.

Talented musician and lacrosse athlete (England U19 trials) Millie Bowater, from Henley, will go on to study biology, chemistry, maths and economics, having achieved six 9s, one 8, two A*s and an A.

Emily Oram, from Chalkhouse Green, who is a dancer and is part of the U19 England lacrosse team, excelled in her grades with four 9s, two 8s and three A*s. Headmistress Julia Harrington said: “The enthusiasm and hard work we have seen from this year group has been phenomenal. They have been thoroughly committed to their academic achievements and continue to show their determination to succeed in sixth form.”

At The Oratory School for boys in Woodcote, 46 per cent of all grades were 7 or above and 86 per cent were 4 grade or above. Both figures represent significant rises on last year.

The highest achievers included Lucas Sieyes, from London, who achieved three grade 9s, one 8 and two 7s as well as five A*s.

Forty-seven per cent of grades in art and design were grade 9.

In the single sciences 58 per cent achieved A* to A grades.

Archie Barribal, from Nettlebed, gained an A* in physics, As in chemistry and biology, 9 in English language, 8 in English
literature, 7 in geography, design technology and history and 6 in maths.

He will study English literature, history and philosophy at A-level at The Oratory.

Archie said: “I’m not too bad with exams because I think if you revise enough then taking them can actually be okay. I sort of put the results to the back of my mind over the summer but as the weeks built up you start to think about it.”

Sam Riseley, from Watlington, achieved As in all three sciences, grade 9 in English literature, 8 in English language, Latin, Spanish and maths and 7 in geography and maths.

He said: “I was relieved that I had done well. I was surprised with English because that’s not my strongest subject.

“There were a lot of exams but they were spaced out. It was quite hard to keep going but there’s a lot of breaks in between so that was helpful.”

He will stay at The Oratory to study for A-levels in maths, economics and Spanish.

Headmaster Joseph Smith said: “Like most schools and candidates, there was a certain amount of apprehension about these results, the new specifications and 9 to 1 grading system representing something of a leap into the unknown.

“Therefore we are all delighted that our boys have performed so well, with 46 per cent of exams graded 9 to 7 (A* to A). They, and their teachers, should be very proud of their achievements.

“Throughout the year and the exam period, teachers put on a huge number of extra sessions and worked tirelessly to help their students achieve their target grades and the boys bought into this programme.

“For a school with a broad intake, academically speaking, and a focus on developing young people in a much broader and deeper sense than exam results alone can demonstrate, we are hugely pleased with and proud of these results.”

The sciences featured particularly strongly, with 100 per cent of grades in biology, chemistry, physics and geology at A* to B.

James Penrose, from Henley, achieved seven A*s, three A grades and an 8.

He was pleased with his results which he revealed in front of his family.

James said: “I opened the envelope so aggressively that I tore the sheet of paper that had the results on so I had to put it back together to read them!”

He will stay at the school to study English, history and Spanish at A-level.

James Swinburn, from Henley, was awarded A*s in geography, chemistry, biology and physics, As in English literature and language and religious studies, a B in Spanish, 8 in maths and 7 in PE.

He will study for A-levels in physics, chemistry and maths at the school.

He said: “It was a little bit nerve-wracking opening my results. Because I’m dyslexic I’m very happy with my results in English and Spanish. I knew the sciences and maths were my strongest subjects.”

James, who rowed for Henley Rowing Club at this year’s royal regatta, added: “I was rowing all year but I think I balanced it quite well and wasn’t too stressed. Doing sport is a distraction from revision.”

Headmaster Jesse Elzinga said: “I am delighted with these superb GCSE results, which represent the hard work of pupils, our staff and supportive families.

“Given the new grading system of numbers in many subjects, it is difficult to compare exactly with previous years but by all measurements this is an extremely strong set of results.

“We are very proud of these strong statistics yet more important than the overall numbers are the many individual success stories and I am proud of what every young man has accomplished.”

Seven girls from the Henley area at Cranford House in Moulsford amassed 63 passes between them with 35 of those at grades 9 to 7.

They were Billie Moore, Mia Jobson, Eleanor Lee, Savannah Jackson-Comley and Izzi Stewart as well as twins Katie and Emillie Jackson who achieved 14 grades 9 to 7 between them.

The school said 85 per cent of all grades were between 9 and 6 and 65 per cent were grades 9 to 7, representing a 15 per cent year-on-year increase in attainment at the very highest levels.

Sam Simpson, from Peppard Common, was one of the top performers at St Joseph’s College in Reading. He achieved eight grades at 9 to 7, one grade 6 and one C.

He is now planning to take
A-levels in maths, further maths, physics and chemistry with a view to reading electronic engineering at university.