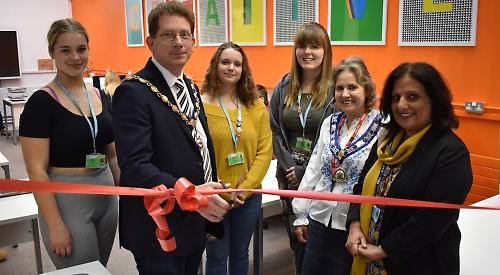 A NEW computer suite has opened at The Henley College, writes Axel Fithen.

The room in its Rotherfield building has been equipped with 10 iMac computers at a cost of £15,000.

It has also been repainted by staff who run the creative media courses and their children.

The college funded the project by applying to the Tony Lane Foundation, which gives money to causes in the community each year.

It originally asked for £10,000 but received double the amount. The college will now spend £5,000 on running business enterprise days at the town hall on June 6 and 13.

The suite was formally opened by Henley Mayor Glen Lambert on Wednesday last week. He cut the ribbon watched by more than 20 students and principal Satwant Deol.

Town councillor Lorraine Hillier, who chairs South Oxfordshire District Council, also attended. She was a friend of Mr Lane, who was mayor of Henley a record four times between 1971 and 2002.

Cllr Lambert, who is a software programmer, said: “Historically Apple have been popular with the creative industries. They are much more compatible with Wordpress and Facebook because they are all running on Unix-compatible machines.

“In this day and age, it is increasingly important for our young software engineers and computing graduates to be skilled on multiple platforms.”

Mrs Deol said the suite will help the college realise its vision of becoming a digital hub.

“I would like to thank the Tony Lane Foundation for this generous donation as we just do not have enough money on our own.”

Mrs Deol said she hoped to hire out the suite for the wider community to use.

The students are looking forward to using the new computers.

Jude Coaker, 18, said: “These Macs are known for being better for editing [than PCs]. They will help for the whole editing process. I’m going to be living in here.”