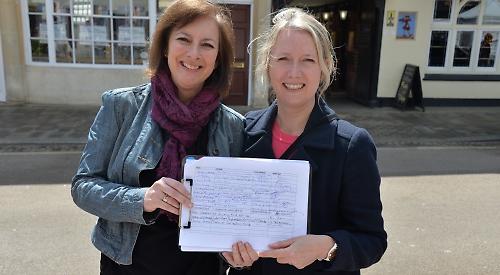 CAMPAIGNERS demanding fairer funding for schools collected 150 signatures on a petition in two hours in Henley town centre on Saturday.

Michelle Thomas and Louise Pegley had a stall in Falaise Square and asked passers-by for their support.

The petition calling for better funding for Gillotts School, the town’s only secondary, and other schools in the Henley constituency has been launched by its MP John Howell, who will present it to Parliament. Mrs Thomas, a new town councillor, said: “It went really well. We were busy throughout the whole two hours either talking to people or taking their signatures — it was non-stop.

“The petition was well received by a wide range of different people. We had parents, grandparents and concerned residents.

“We also had lots of people from other schools. There were parents from Wargrave and Piggott School. We gave them the information they needed to take to their own MP, who is Theresa May.”

Mr Howell himself visited the stall and Mrs Thomas said: “He was encouraging us and he’s going to make sure this is put in front of the right people in Parliament.”

Mrs Thomas, of Belle Vue Road, Henley, is also planning a march through the streets of Henley.