Students' fundraising will help pay for a Childline volunteer 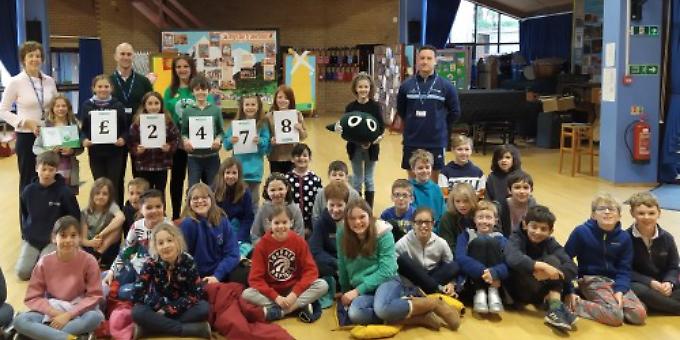 CHILDREN at the Dolphin School in Hurst received a visit from the NSPCC early in February to deliver their “Speak Out, Stay Safe” assembly to our boys and girls, and to share information on how children can keep themselves safe from harm and get help if they have any worries.

Following the initial visit, students from Reception to Year 8 were encouraged to raise funds over a two-week period to support the NSPCC, with the results being announced in assembly after half term.

A suggested minimum donation of £1 was encouraged, but parents (and friends and family) were encouraged to sponsor children per skip, jump, etc, to set targets for the children.

Each PE session entailed a carousel of activities including skipping, shuttle runs, sit-ups or squats, and star jumps. They also had the option of carrying out some home chores for extra cash towards the fundraising, if parents were so willing.

A representative of the NSPCC returned to count and collect the monies raised the week after half term, before reporting the results to the school. She thought she would be doing this for 20 minutes or so, but due to the amount raised, she was here for well over an hour.

After a quick refresher quiz in assembly, she presented the total figure to the staff and pupils this week. Our boys and girls had raised a staggering £2,478.

This made us only the sixth school in Berkshire to raise over £2,000 and the smallest school to achieve this milestone. We have been informed that the funds raised will be used for the following: £1,600 will go towards training a volunteer Childline staff member in their first year; £550 goes towards running the annual “Speak Out, Stay Safe” programme; and the remainder will go towards the more general running of the Childline call centre, such as for training and staffing.

We are so proud of all of our Dolphin boys and girls for their fantastic efforts, and that we have been able to support such a worthy cause.

For more information, visit the school online at www.dolphinschool.com

Students' fundraising will help pay for a Childline volunteer

CHILDREN at the Dolphin School in Hurst received a visit from the NSPCC early in February to ... [more]

SHIPLAKE College is looking to expand the size of its Lower School House for Year 7 and 8 boys. ... [more]

SET in 35 acres and just a short walk from the River Thames, Queen Anne’s School in Caversham is an ... [more]