Caring girls excited to be chosen as school captains 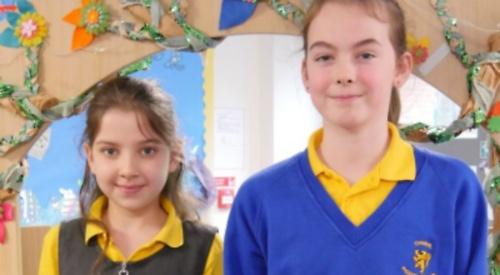 Year six students Willow Morris and Erin Goodall were selected after being interviewed about what they hoped to achieve and what their strengths were.

The girls will be supported by a team of school ambassadors and prefects.

They both said they were excited to have been chosen.

Willow said: “I actually went for the job underneath school captain but then when I was interviewed I thought, ‘If they can believe in me then why shouldn’t I?’

“I want to make sure that the school is a safe place for everybody and that nobody doesn’t enjoy going.

“I want to make sure everybody feels the same way that I do when I come to school. If something is going on at home, they should be able to feel like they can have fun at school.

“I have been told that I’m quite a good role model and I try my best to be as kind and caring as possible at all times.”

Erin said: “I have been at the school for six years now and over that time I have made new friends across the school and enjoyed lots of new experiences.

“I wanted to become school captain because I wanted to give back and help other people enjoy their time as much as I have.

“I think I am approachable, so people can come and talk to me if they are worried about something. I am also hard-working and can be relied upon.”