School is top class for my son in lockdown 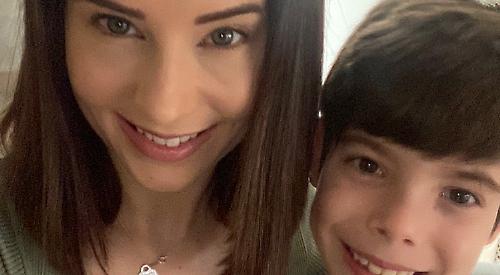 THE mother of a boy with special educational needs has praised his teachers for helping him to continue learning from home during the coronavirus pandemic.

Roman Wiltshire has several conditions which affect his reading, writing, concentration and social skills after being born more than 10 weeks premature and weighing just 1lb.

The nine-year-old, of Greys Hill, Henley, was overlooked at his old primary school on the south coast but finally got the help he needed when he moved to Trinity Primary School in Vicarage Road a year ago.

Staff encouraged his mother Ashley Adams, who lives with Roman and her partner Martin Andrews, to pursue a diagnosis as he was struggling with his class work and suffered anxiety.

Shortly after he enrolled, the school gave him extra one-to-one help in the classroom and devised ways of structuring his day so that he felt less worried and could focus more easily.

When the first lockdown was imposed, the team adapted all of Roman’s homework and gave him constant feedback over the internet to make sure he remained interested. Miss Adams says this helped Roman to make progress in his writing and also helped her to feel less alone as her partner has to work full-time.

She said: “The staff are always at the other end of the phone, no matter what the time, and they give frequent, regular feedback so Roman always feels reassured that he’s doing the right thing.

“We can’t do a six-hour day but we try to manage three and it’s going well. It would have been disastrous without the extra help — we would really have crumbled.”

Roman was born in Perth, Australia, and moved back to Britain with Miss Adams when he was five.

She says his first school spotted him struggling but took no action despite her pleas. It was a relief when Trinity acknowledged there was a problem and immediately looked at ways of helping as well as giving advice on private assessments.

The school will ask Oxfordshire County Council, the education authority, to put together an education, health and care plan which will outline Roman’s support needs until he turns 25.

Miss Adams said: “I felt severely let down by Roman’s old school but Trinity was quick to call a meeting, which was wonderful as I’d been fighting for so long to work out what was going on.

“I had a mother’s instinct that something wasn’t quite right and the old school noted all my concerns but did nothing. I later found they’d written a report on all his problems but never shared it with me, which was very upsetting.

“I was on the point of giving up because I felt so unheard — it was soul-destroying. Once we’d identified the issues, they did things like giving him more time, warning him about changes to the daily routine and having someone to talk to.”

Staff stayed in contact as soon as lockdown was imposed and adapted Roman’s assignments so that they related to either Lego or animals, two of his favourite topics. They also helped his mother create a daily task chart with pictures to help him stick to a routine.

Although children classed as “vulnerable” were allowed to go into school for three days a week, it was decided Roman would have more stability at home. He returned to class when the coronavirus restrictions were eased last summer.

Miss Adams said: “Roman was sad to hear we were going back into another lockdown as he misses his friends but they’ve really gone the extra mile to keep him engaged, which makes it easier for me to help him.

“They could have just sent out the same work that everyone else gets, or even made him do year 3 work, but they’ve insisted on doing everything they can for him and we’re so thankful.

“He finds it hard to hold a pen or pencil but his writing has improved, which he’s so proud of and so am I. His teachers were thrilled and it helps him to realise that he can achieve things.”

Roman now enjoys school and is looking forward to the end of lockdown. Miss Adams said: “He never used to be happy because he was struggling without support but the staff and his lovely friends have helped him to feel good about himself, which is lovely to see.”

Miss Chaplin said: “The lockdowns have been a real challenge but over the past year we’ve learned more ways of ensuring that children with special needs remain engaged and well-looked after. It’s lovely to hear that parents are pleased with the support we’ve given.”