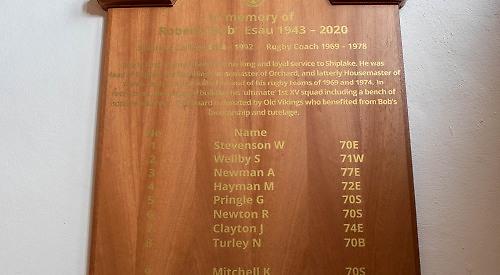 A MAN who taught at Shiplake College for 27 years has been remembered following his death.

Bob Esau died in February last year, aged 76, after a battle with cancer.

The Old Viking Society was keen to honour his service to the school, where as well being an English teacher, he coached the rugby 1st XV for almost 10 years.

With his family’s blessing, the college decided to install a memorial board listing his ultimate first XV rugby squad.

The £650 needed to buy the board was raised in just a few days.

It now hangs in Orchard House, where he was the founding headmaster. Former staff member Peter Webb described Mr Esau as “a very supportive colleague”.

He said: “I met Bob in the autumn of 1975, when, fortunately for me, he was appointed my mentor for my final teaching practice.

“It was not long before I had taken over the majority of his timetable and became involved with Orchard House.

“Bob was approachable and he represented his colleagues when there was a problem.

“His open mindedness and his wish to see fair play was an example to all. It often became quite obvious that he could see the good in people and had the knack of fostering it.”

Mr Esau founded the rugby club at the independent school and was in charge until 1978. From 1974 to 1978, he was the first Orchard housemaster.

He declined the offer of having the house named after him, which broke from the college tradition.

He was later Welsh housemaster for 14 years and was a major fundraiser for its refurbishment and extension.

After leaving the college, he was secretary of the Old Viking Society until 2001.

Old Viking Alistair Newman added: “Bob was a kind, wise man who was a friend to so many who met him. To many Old Vikings, he was an inspirational teacher and mentor and he became a friend to many Shiplake leavers.”