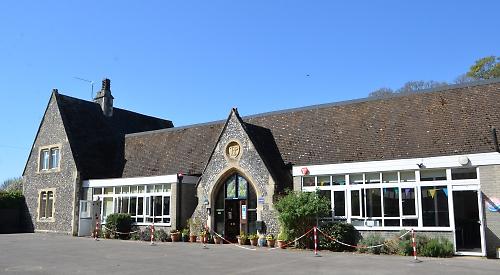 THERESA MAY has reaffirmed her support for plans for the Piggott junior and infant schools in Wargrave to move to a shared site.

The Maidenhead MP and former prime minister spoke after visiting the schools and hearing about the One School, One Site project, which has been revived after a number of failed attempts.

The suggested joint site is land off Twyford Road, near the Piggott secondary school just outside Wargrave, which is owned by the Diocese of Oxford.

The infant school is currently in Beverley Gardens and the junior school is in School Hill. Funding for the new school would probably come from selling these sites for housing.

Mrs May was welcomed by parents Liz Kelly, from Ruscombe, and Karen Robinson, from Hare Hatch, at the infant school in Beverley Gardens on Friday morning.

The women thanked her for coming and Mrs May joked: “This is not a project that is new to me.”

After spending about 20 minutes meeting pupils and speaking with headteacher Elaine Hughes, Mrs May went to the junior school for a tour.

She then spoke to Mrs Kelly and Mrs Robinson in the playground about some of the issues, including inadequate facilities and road safety. Mrs Kelly, 44, whose sons Finn, seven, and Liam, five, attend the junior and infant school respectively, said: “We invited Mrs May at the end of last year and it was originally scheduled for January but it had to be pushed back because of the lockdown.

“The OSOS project has been going for a while and we just want to know if it is ever going to happen.

“The playground for the junior school is not sufficient for all the children and some of the classrooms are so small and the wrong shape, so the children have to stand at the back of the room to read the whiteboard.

“The parking around here is terrible and there are many times when you see lorries struggling to get around the cars.

“When my son joined the junior school in September, I realised all the problems they were having.

“Karen has had her children at the schools for longer and our view is that if the project isn’t going to happen we still need the funding to overcome the issues.”

The OSOS project has been on the table since 2008 but has never been able to progress through Wokingham Borough Council, the education authority.

The plans were delayed due to the recession and revived in 2013 with support from Mrs May, who was then home secretary, but still didn’t come to anything.

In 2014, the governors of the two schools said their existing buildings were either in a poor state of repair or unsuitable.

Mrs Robinson, 49, whose children Niamh, 10, and Aidan, eight, are both at the junior school, said: “The school works, but the building doesn’t. We want a school that is fit for purpose.

“This project started a long time ago and had a resurgence in 2013.

“This is a lovely place to live and there are a few affluent people but the school shouldn’t suffer because of that. We are not funded well enough but still perform highly.”

Mrs Hughes said: “We were delighted to meet Mrs May. It was wonderful to hear our pupils explain all the things they love about our school and show how the tremendous dedication and creativity of our staff enables us to provide a first-class education, despite the challenges with our buildings and facilities.”

Mrs May said: “These schools have consistently provided a high standard of education.

“I was pleased to visit and hear about the plans, not just to maintain that high standard, but develop it further for the benefit of the children.”

Mrs May was joined on her visit by Graham Howe, a former school governor, who is a parish councillor and deputy executive member for children’s services on the borough council.

He said: “We have had a number of hold-ups and we’re getting to the point now where we really want to perform or get off the pot.”

Councillor Howe said the schools needed to produce an educational case, which the planning department would require to demonstrate exceptional circumstances to build on green belt land.

He said: “Building on green belt is what we have to do with Wargrave because the area around it is all green belt. This is the first major field as you head out of Wargrave.

“I was let down about five years ago. Some officers at Wokingham had verbally promised an educational case and then one of them moved on to another borough and no trace of the educational case could be found, so we had to hit restart.

“We need help from Wokingham to get planning approval through and some seed money.

“It has been difficult for us to get the attention we deserve in the north of the borough. A lot of attention has gone towards the regeneration of Wokingham town.

“I’m hoping to get the pre-application done this summer and then we will know what other issues we’re facing. If there’s a will of the council, there’s a way of getting it done.”