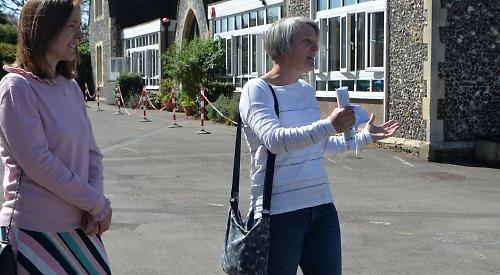 AN online petition calling for better facilities at the junior and infant schools in Wargrave has been launched by a parent.

Liz Kelly is asking Wokingham Borough Council, the education authority, to either go ahead with bringing the schools together under one roof or invest more money to make them fit for purpose.

She and fellow parent Karen Robinson outlined their concerns to Maidenhead MP Theresa May when she visited Robert Piggott Infant School in April and the former prime minister reaffirmed her support.

The One School, One Site campaign was first unveiled in 2008 but has failed to deliver despite several attempts. It suggests building a new joint school on land off Twyford Road, near the Piggott secondary school just outside the village, which is owned by the Diocese of Oxford.

The petition has already received 287 signatures, which is enough for the issue to be raised at a meeting of the borough council.

It calls on the council to relocate the schools or to make the existing buildings at both “fit for outstanding education of the children in our community”.

Mrs Kelly, 44, from Ruscombe, has one son Finn, seven, at the junior school in School Lane while the other, Liam, five, attends the infant school in Beverley Gardens.

She said: “OSOS proposes to merge the two schools on a single site but for a number of reasons this has not progressed.

“During this time, the current buildings have deteriorated and are in need of repair. Both schools are in desperate need of modernisation to meet the educational needs of our children. We need investment.

“At times, investment in the schools has been withheld because of this overhanging decision about a possible move. We need local support for the campaign to raise this issue at the council.”

The proposed relocation of the schools was delayed by the recession in 2008 and then revived in 2013 with support from Mrs May, who was then home secretary, but this still didn’t come to anything.

In 2014, the governors of the two schools said their existing buildings were either in a poor state of repair or unsuitable.

Funding for the new school would probably come from selling the existing school sites for housing.

Due to the proposed new site being on green belt land, the schools have to produce an educational case required by the council’s planning department that demonstrates exceptional circumstances needed for development.

Mrs Robinson, 49, from Hare Hatch, said families were being asked for more help than ever to keep the schools running and the parent-teacher association recently paid for replacement windows at the junior school.

Her daughter Niamh, 10, is moving to the senior school in September, while her son Aidan, eight, is still at the junior school.

Mrs Robinson said: “My daughter has been going to the schools for seven years and in that time the facilities have deteriorated so much that they are starting to have a detrimental impact on the children.

“The schools are requesting more and more help financially and physically to keep things running.

“When Niamh started going, they had a swimming pool but that got to a point where it was so run down that they closed it.

“The council says it doesn’t want to spend too much on the current properties just in case the OSOS project goes ahead, but that ‘just in case’ has been going on for 13 years. The schools are being heavily subsidised by the parent-teacher association and it has just paid to replace the windows.

“Quite frankly, that is something that should be done by the authority that owns the building. It is a real shame for Wokingham not to realise what a great community spirit Robert Piggott has.

“Covid has had a big impact on fundraising and the PTA’s funds will be greatly reduced. The more support we can get the better.”

Mrs Robinson says she would prefer the schools to be modernised rather than relocate but that there is a good argument for building on green belt land if it means the children have the facilities they need. Graham Howe, a parish councillor and Wargrave’s representative on lthe borough council, supports the campaign.

He said: “The aim is to get a school that is fit for the 21st century. We have been lobbying for this since 2008 and I think it has been obfuscated and held up by previous people at Wokingham.

“The alternative is that it costs the borough council money to get these schools in a good condition. The OSOS alternative is really the cost-zero option.

Councillor Howe, who is executive member for children’s services. has said he was “let down” five years ago when previous officers at the council gave a “verbal promise” for the educational case but when they moved on no trace of this could be found.

During her visit in April, Mrs May said: “These schools have consistently provided a high standard of education. I was pleased to visit and hear about the plans, not just to maintain that high standard, but develop it further for the benefit of the children.”

The petition will remain avaiable to sign until Wednesday (July 2) at bit.ly/3vBhPsc or visit the borough council’s website and search for “petitions”.