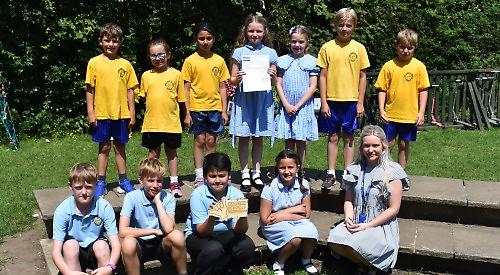 THE junior and infant schools in Wargrave have achieved plastic-free status.

It is an honour given to establishments and communities by campaign group Surfers Against Sewage.

The schools have an eco council, which has been working towards the goal for the last two years.

Being plastic-free does not mean that there is no plastic, but it involves eliminating as much single-use plastic as possible. The schools received a certificate and wooden plaque to mark their success.

Abby Trayte, who teaches year 3 and 4 children at the junior school in School Hill, has been running the council for the last year.

She said: “It is a fantastic achievement and it has brought us closer together in a year when we could have easily been separated. It has been really nice to have that community spirit.

“We are getting even better at recycling and it has had a massive impact on the school community. Everyone is really keen to get involved. It is becoming more of a wider issue that people are on board with.”

The eco council was merged with the school council a year ago to work on community events and charity initiatives.

Over the last year, this has included holding a Macmillan coffee morning, donating Christmas presents to children through the Salvation Army and taking part in the “Captain Tom 100” challenge.

It meets every fortnight and there are 18 children across the two schools on the council.

Although the coronavirus pandemic hindered its progress slightly, the pupils were able to achieve the five goals required.  These include creating an action plan and “trash mob” but students were already holding regular litter picks.

They had to write a letter to their MP, Theresa May, but they are yet to receive a reply. The children also campaigned by writing to manufacturers, including Mars and KP Snacks, encouraging them to use more environmentally-friendly packaging. The final step was finding ways to eliminate plastic from the schools and the children opted to have glass milk bottles and no plastic straws.

They also made changes to the way school discos would be run, banning glow sticks in favour of face paint and having penny sweets instead of chocolate bars to cut down on packaging.

A tuck shop, which used to be run at the end of every school day, was stopped as this involved a lot of plastic wrappers.

Miss Trayte added: “Even before I started, the children had already removed plastic straws from lunches and taken glow sticks out of the disco. We litter pick at the school regularly but some of the children take it upon themselves to do it in the local area. It would be great to get Theresa May’s support.

“We have not always been able to meet in the way we would have liked to but we have stayed in touch via email and we had regular meetings online to keep the momentum going.

“I think the hardest part is making sure that you provide enough evidence, so it is important to keep track as you go.”

As well as being a parent, she has campaigned locally to make Twyford a plastic-free community, which it achieved in February.

She and fellow parent, Lindsay Hammersley, encouraged the children to strive for the same status when they realised it was open to schools too.

Mrs Kelly, a finance consultant, said: “It was all on hold because of covid, but when they were able to meet again they started doing litter picks, which is one of the objectives.

“As a mum, it was important for me to encourage my children to think differently. I presented to the school in the autumn of 2019.

“It has been a long time coming and they should all be very proud. We are really happy we managed to achieve this before the end of term.

“Before we have children, we can live a little bit excessively, but when you have children you realise how your values change. My children weren’t on the eco council, but they were involved in writing the letter to the MP.”