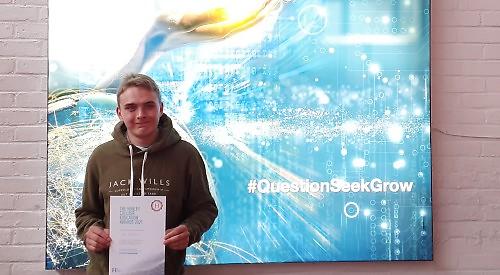 THE achievements of students at The Henley College were recognised at its annual education awards.

Sixty teenagers received certificates for excellence across all subject areas, from performing arts and law to the classics and travel and tourism.

The ceremony, which is normally held in person at the college, took place online due to the coronavirus pandemic. Special guests included Henley Mayor Sarah Miller and Amanda Heath, who is a trustee of the Henley Educational Trust, which sponsors the awards.

Max Barklem received the principal’s award in recognition of his “academic bravery” over the last year. He recently completed a foundation learning programme as well as a level 2 health and social care course.

Max, who lives in Henley, has also played an active role in the student body, helping at events and speaking with governors.

He said: “I was surprised and honoured to be given this award but am very happy as I am proud to be part of The Henley College community.”

Ellen Fearnside, from Peppard Common, who studied for a BTEC in engineering and mathematics, won two awards — the Peter Howard Memorial Award for engineering and another for personal achievement.

Ellen said she felt honoured that her teachers thought so highly of her and credited the college with helping her grow in confidence.

Daisy Weiser, from Lower Shiplake, also won a personal achievement award and said she was “over the moon”.

College principal Satwant Deol said: “Our students have yet again exceeded our expectations and have handled a year of exceptional challenges and disruption with great maturity and resilience.

“They have not only shown great adaptability to the changes in the way they received their education but also how passionate and committed they are to succeeding.

“These awards also show the amazing skill and commitment of our staff who have worked tirelessly to help our students realise their potential.”