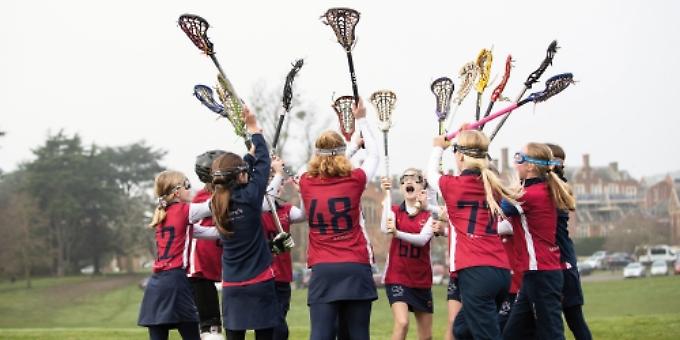 “I AM immensely proud of the girls,” says Julia Harrington, the outgoing headmistress of Queen Anne’s School in Caversham.

In an open letter, she reflected on her last term at the school after 14 years, saying: “The energy and enthusiasm they have shown in the first few weeks of the academic year has been hugely comforting and inspiring, despite all our lives still being very much impacted by covid.

“The co-curricular programme has been bursting at the seams with countless sports fixtures, concerts, debates, and lectures.

“I commend the parents and staff who stood stoically on the side of the lacrosse pitches in the battering rain on a recent Saturday meet.

“The introduction of football in partnership with Get Active Academy has also proved to be a hit among the girls.

“We have already welcomed a number of prominent guest speakers to school this term, including former Poet Laureate Carol Ann Duffy and award-winning astronomer Colin Stuart.

“Last week, the whole school was taken over with a cacophony of sounds as the former cast of Stomp ran body percussion workshops.

“This week we welcomed oboist Ewan Millar, a BBC Young Musician of the Year finalist, to perform.

“In our busy lives it is important to take the time to stop and celebrate success and on Friday the achievements of our young actors were acknowledged with a LAMDA awards presentation.

“Pupils in the younger years competed in the Scholars’ Essay Competition, in which they had the freedom to research a topic of their choice. The topics varied wildly from ‘Reading prison should be made into a community arts centre’ to ‘Is it possible to prove God’s existence?’

“At the start of November, we have the privilege of returning to Westminster for our biennial service of thanksgiving.

“Queen Anne’s School is proud to be part of the United Westminster and Greycoat Schools Foundation.

“Roy Blackwell, former clerk and director of the foundation, will be the speaker at what promises to be a celebration of the school’s central ethose of tradition and modernity.

“I will be handing over leadership of our thriving school to Ms Elaine Purves in January. I wish her every success in the leadership of the next chapter at Queen Anne’s.”

Queen Anne’s School is a day and boarding school for girls aged 11 to 18, set in a 35-acre campus in the heart of Caversham.

To book a place on the next open morning on November 19 or to arrange an individual tour, telephone 0118 918 7333 or email admissions@ qas.org.uk

THE sound of rain falling is never a deterrent for girls and boys at Crosfields School. Forest ... [more]

AT the Piggott School in Wargrave, we believe your sixth-form education is a journey of ... [more]

AT the Piggott School in Wargrave, we believe your sixth-form education is a journey of ... [more]