School runners finally able to take on half marathon 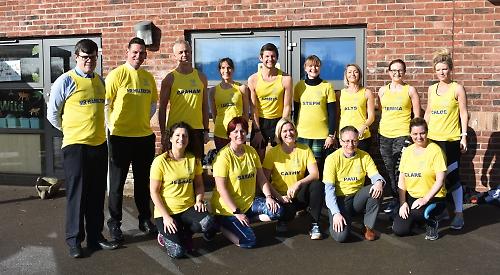 A GROUP of parents and teachers from Charvil Piggott Primary School are to take part in the Reading half marathon — 19 months later than planned.

They are trying to raise £6,000 for a new 300m artificial running track at the school, which they hope will be installed by the end of the academic year.

Most of the original 18 runners will be running in the event, which is on Sunday, November 7.

They originally planned to run the half marathon in April last year but it was postponed by the outbreak of the coronavirus pandemic. Two further attempts to stage it in November last year and April this year were also postponed.

Parents Chloe Cox and Paul Morris have had to drop out due to injury but they have been replaced by Ed Goodall and Hana Hutchinson.

The idea for the fundraiser came from Mr Edwards, a social worker, who lives in East Park Farm,
Charvil, with his wife Debbie and two children, who are pupils.

He believes the importance of the running track has been heightened by the lessons learned during the pandemic. Mr Edwards said: “Because of covid, we feel the emotional wellbeing of the children has been recognised and that time outside the classroom and physical activity are seen as more important.

“The aim will be to have something in place by the end of the school year for next summer at least.

“It has been a difficult time because of covid but we have still managed to raise £2,200.”

Mr Edwards, who ran the half marathon previously in 2012 and 2019, said: “It is fourth time lucky and it will go ahead this time.

“It is a really well-organised event and is always well supported all the way around the course.

“I’m glad that most of the original 18 are still able to take part. It has been such a long time to wait and it has been tough to keep up the momentum.

“People are more nervous about it now because we did a lot of training originally and were really focused but there were so many unknowns with the continued postponements.

“It has been really nice to have a clear goal to focus on again.”

The track will be purchased through the Daily Mile, an international initiative which encourages children to run or jog 15 minutes a day. About 6,000 schools in England have already signed up.