Storm Eunice: Woman hit by bricks while walking on pavement 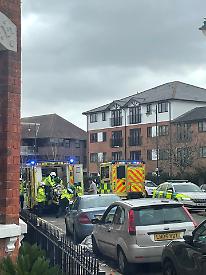 A WOMAN was injured after she was hit by bricks that were hurled in the air by Storm Eunice.

A chimney stack on a terraced house in Station Road, Henley, was brought down in high winds and landed on her while she was walking along the pavement below.

The woman was laying between two parked cars and residents came out of their homes to try and help her.

They called the emergency services and put blankets and towels on her to try and keep her warm until they arrived.

Officers from Thames Valley Police shut the road at the junction with Reading Road at about 11.30am and it took six paramedics to carry her to an ambulance before further treatment.

The woman was taken to the major trauma centre at the John Radcliffe Hospital in Oxford in a serious condition.

The officers told residents not to use their front doors nor the pavement as firefighters checked the building to make sure it was structurally sound.

Storm Eunice continues to rage across Oxfordshire, causing disruption to travel, as gusts of wind of up to 80mph are bringing down trees and cancelling train services.

The Met Office has already issued a rare red weather warning, meaning there is a danger to life, and is expected to stay in place until 3pm.

Two huge trees were brought down at Greys Green, close to the junction with Shepherds Green while roads from Rotherfield Greys to Henley are littered with trees, branches and other debris.

Six trees have reportedly come down in the Gallowstree Common and Wyfold areas which has taken down power lines.

Two trees are down blocking northbound traffic on the A4074 at Cane End and another has blocked Reades Lane in Sonning Common.

The Henley to Sonning Common is also blocked at Devil’s Hill.

Schools in and around Henley were closed to pupils and staff this morning before the worst of the storm hit.

Badgemore Primary School in Hop Gardens, Valley Road Primary School, Gillotts secondary school and The Henley College are among those to switch to remote learning from home.

Train operator Great Western Railway has said services across its whole network may be cancelled or delayed with disruption expected until the end of the day.

The Henley to Twyford branch line is planned to operate as normal but almost all services from Reading to London Paddington have been cancelled.

Where services are running, to make sure trains are able to run safely, speed restrictions will be in place, which will increase journey times significantly.

South Oxfordshire District Council suspended waste collections across the districts for the rest of today.

A spokesman from the council said: "Worsening conditions and a number of blocked roads meant that we have taken the decision to cancel the rest of today’s collections.

"Our waste crews start at 6am and so were able to complete many of the rounds before the weather got too bad. If you have not had your bin emptied, please bring it in and try to keep it safe from the weather.

"Our crews will be back again tomorrow to empty your bins so please could you put them out again when the weather has eased off and it is safe to do so, either tonight or before 6am tomorrow."

Storm Eunice is hot on the heels of Storm Dudley, a milder storm, which brought down trees in Oxfordshire earlier this week.