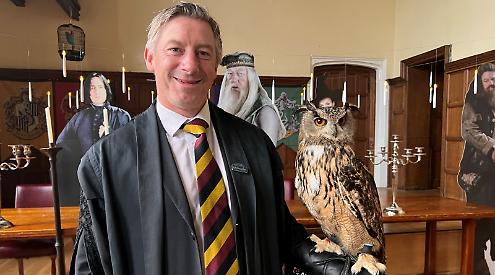 MORE than 400 children attended a special magic day for children at Shiplake College.

The visitors became witches, wizards and “muggles” as they cast spells, made potions and played quidditch.

In the Great Hall, there was a grand banquet with floating candles and treats from a café run by the college’s catering team Thomas Franks.

On the terrace, there was Lego building with the help of college pupils and staff while on the lawn Berkshire Birds of Prey showed off birds including Bertie the eagle owl and Bella the barn owl.

On the quidditch pitch, matches were played with teams on broomsticks chasing the golden snitch.

Indoors, there was a wand-making station with head of art Keli Thomas.

In the the grounds there was an A-Z quiz trail where children had to find clues and fill out the answers on a map. Along the way there were selfie stations and duels with a professor in return for a chocolate frog.

Katherine Green, director of external relations, said: “It was wonderful to welcome so many guests to our first Magic at Shiplake event.

“Everyone who came made such an effort with their costumes and it was great to see everyone having a fantastic time.

“A huge thank-you to the members of staff and pupils who gave so much support and help on the day.”