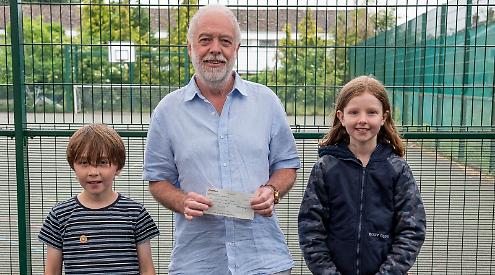 Attractions included stalls, a barbecue, bouncy castle, lucky dips, a raffle and games such as splat the rat and welly-wanging. There were also performances by the school choirs and bands.

The fair raised about £3,000. Amy O’Connor, who chairs the parent-teacher association, said: “It was bustling and there was so much to do and see. It was lovely to see so many familiar faces.”

At the event, cheques for £750 were presented to both Sonning Common community first responders and the Greenshoots nursery in Peppard.

The money was raised by this year’s On Your Bike, an annual fundraiser organised by the school.

The cheques presented to Greenshoots trustee Chris Fuller (top) and community responder Chris Brooks (above) and by Jake Willis and Elsie Davis, children of On Your Bike committee members Kathryn Willis and Geoff Davis.