FORTY-FIVE pupils from The Henley College staged a concert at the Kenton Theatre.

The teenagers, most of whom are studying music, performed dozens of pop, rock and jazz songs in groups or solo. Many were accompanied by the colleges big band.

Click here to watch our video report on the evening.

Among the performers was 18-year-old Matt Maltese, from Sonning Eye, who played two of his own compositions, called Plan B and Covered My Wounds. He was also accompanied by the band for a rendition of Maschwitz and Sherwins A Nightingale Sang in Berkeley Square.

Former student Mo Evans, from Sonning Common, performed two of his songs called I Cant Come Any Closer and Spilled My Love.

The 18-year-old is the son of singer Sam Brown and grandson of rocker Joe Brown and is now pursuing a career in the music industry. Guitarist Luke Tyler performed Gary Moores The Loner while Grace Willis, Hannah Walters, Laura Deverell and Gabrielle Pausey sang an a capella version of Mama Who Bore Me from the musical Spring Awakening. Alex Goodyear and Charlie Hutchinson played two drum duets called Changing and Cross Fire by percussionist Chris Stock.

Director of music David Golby said: It went really well. It was fantastic to see such a large audience and to hear so many different types of music. The students enjoy the collaboration and being in a historic environment like the Kenton. They get real pleasure out of showcasing what they can do and I hope it will become an annual event. £1 from every concert ticket sold will be donated to Henley Youth Centre. 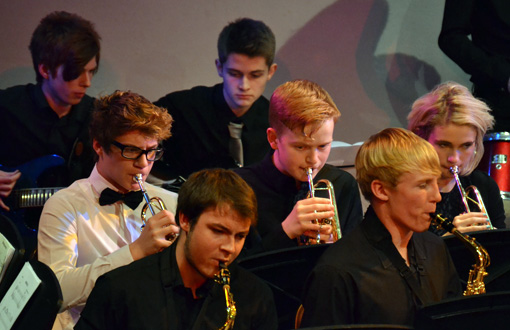