A HEADTEACHER has paid tribute to the Henley school that she is leaving after seven years.

Karen Edwards, 47, described her time at Sacred Heart primary in Greys Hill as “the best professional years of my life”.

She leaves today (Friday) to become the headteacher of a new free school, The Heights primary in Caversham Heights, which is due to open in September.

Mrs Edwards, who lives in Binfield Heath, said: “This school has a very close-knit community of parents, staff, pupils and governors.

Its heart-wrenching but I know that Im leaving a really good school with a fabulous future ahead of it and I have got a chance to build something just as special in a new place”.

Mrs Edwards has been a teacher for 24 years and taught at schools in London and High Wycombe before moving to Henley.

Her three children, Lauren, 15, Rhys, 14, and 12-year-old Rhian, all went to Sacred Heart and are now at Gillotts School in Henley. Her husband Jerry, a landscape gardener, coached rugby and cricket at the primary school.

Mrs Edwards oversaw a large building programme which culminated in the opening of a new classrooms building last summer. Class sizes have grown from 19 pupils to a maximum of 30. She said: “It has been a privilege to be part of such an incredible community and I will miss everyone enormously.

But change is a good thing and Im sure they will find a fabulous headteacher to take the school to another level”.

Rachel Gavin will take over as acting headteacher until the end of this school year and interviews for a permanent replacement will take place this month.

The Heights Primary School will open in a temporary building in September with two reception classes. A permanent site for the school has not yet been revealed but it is expected to reach its capacity of 350 pupils by 2020. 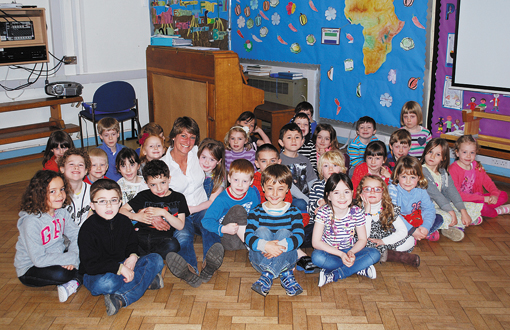