STUDENTS in Henley, South Oxfordshire and Berkshire had mixed emotions as they received their A-level results.

Pass rates at many state schools across the region were down on last year, mirroring the national figures which fell for the first time in more than 30 years.

However, thousands of teenagers will be heading to university next month after achieving the grades they needed.

The Henley College achieved a pass rate of 99 per cent, up one per cent on last year, with 28 subjects at the college recording 100 per cent success.

The proportion of students who attained A* to C grades remained at three-quarters, with 20 per cent achieving A* or A grade.

Principal Tom Espley said: I am delighted that our results have improved once again and that a record number of our students have been accepted by Russell Group universities. 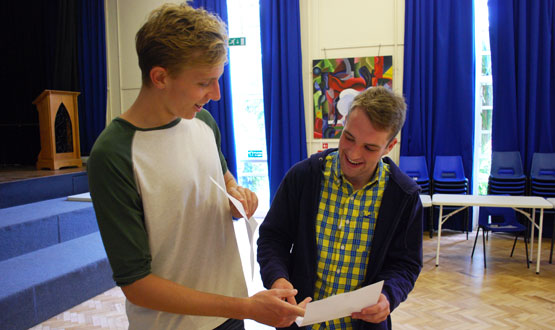 Among the top performers was Will Manson, of School Fields, Shiplake, who is going to study maths at Cambridge University after passing all seven of his A-levels.

The 18-year-old achieved A* in maths, further maths, additional further maths, physics and computing and A grades in French and ICT. He hopes to work in computer software in the future.

Will said: Im delighted. My parents have been really supportive and Id like to thank them for all theyve done. Cambridge was my first choice and I cant wait to start.

The Piggott School in Wargrave recorded a 99.3 per cent pass rate, down from 100 per cent last year.

Every student in photography, art, further maths and Spanish achieved a C or higher.

Two students, Andrew Hartland and Gareth Bird, will be going to Oxford University next year.

Headteacher Hilary Winter, who is retiring this summer, said: These excellent results are rich reward for both staff and students at the school for the tireless and enthusiastic approach they have shown in their shared endeavours during the past two years.

This cohort of students joined the school when I did and I am proud of what they have achieved. I couldnt have wished for a better leaving present.

At Highdown School and Sixth Form Centre in Emmer Green, the overall pass rate was 97.5 per cent, down one per cent on last year.

The number of students scoring three or more A* to C grades fell by two per cent to 36.6 per cent.

However, five per cent of students achieved three or more A* to A grades, a four per cent increase.

Headteacher Rachel Cave said: Weve really worked at making sure the students are prepared for the tougher questions at the very top end. Its a very proud day. The students are going off to university with great results and feeling very excited.

In Oxfordshire as a whole, 93 per cent of students passed at least two A-levels, with 43 per cent having achieved a B grade or above.

PASS rates also fell in the independent sector but this could not hide some outstanding individul performances.

At Queen Annes School for girls in Caversham, the pass rate was 98 per cent compared with 99.5 per cent last year.

A third of the 48 pupils who sat exams achieved A* or A grade and 88 per cent scored C or better.

Jessica Gibbon, 17, from Rotherfield Greys, achieved an A* in economics and A grades in French and maths, securing a place at the University of Bath to read economics.

She said: I was really pleased just to get into my university. I worked really hard for these results so Im very happy.

Ive spoken to quite a few of my friends and I think most of them are pleased with how theyve done.

Emily Green, also 17, from Harpsden, was awarded A grades in English literature and physics, a B in history and a C in maths.

She is going to the University of Virginia as she wanted to study abroad.

Headmistress Julia Harrington said: Im proud of the results the girls achieved and wish them well in the next chapter of their lives.

The pass rate at the Oratory School in Woodcote was down from 98 per cent last year to 94 per cent but the number of top grade passes increased.

Nineteen per cent of pupils at the boys school achieved three or more A*s, up from 13.5 per cent.

Thirty-eight per cent achieved A* or A grade, up from 31 per cent, while 82 per cent were awarded a C or above, up from 78 per cent.

Headmaster Clive Dytor said: The results are generally pleasing, especially as most of the boys got into their first choice of university. Weve looked at our tutoring systems and tightened things up as part of a big academic drive, which has helped. The boys are happy at how well theyve done; they werent as strong a year group academically but theyve really got it together.

At Shiplake College, the pass rate fell from 99 to 97 per cent, while the proportion of students achieving A* to C was 67 per cent compared with 74 per cent last year.

Forty-one per cent of students achieved A* to B grades, down from a record 51 per cent in 2013.

Top performers included Sophie Arnold, 18, from Henley, who achieved A* in history and A grades in English and media. She will be going to Warwick University next month.

Headteacher Gregg Davies said: We are pleased with the results our sixth-form leavers have achieved.

The hard work and preparation put in by our students across their time at Shiplake appears to have paid dividends as 89 per cent have so far secured places at their chosen universities.