THERE were jubilant scenes at Gillotts School in Henley today (Thursday) as pupils celebrated its best ever GCSE results.

Eighty-one per cent of 180 students achieved five or more passes at grade C or above, including English and maths, shattering last years record by almost 10 per cent.

Across all subjects 87 per cent gained A* to C grades.

Headteacher Catharine Darnton said: Im absolutely ecstatic  these are the best results we have had by a long, long way and Im just tremendously proud of the young people and all their achievements.

She said it was a testament to the hard work the school had put in over the years.

It doesnt happen overnight, you have to set your mind to improving a school over a long, long time and its great to see everybodys efforts coming to fruition, he said.

Achievement in the subjects that make up the English Baccalaureate  maths, two sciences, English, a humanity and a language  saw 55 per cent of pupils gain passes at C grade or above.

Many of the year 11 students arrived at the school ready to celebrate at Reading Festival this weekend. Others said they would be enjoying a meal out with their parents or having a party.

High achievers included Sally Kuspisz, 16, of St Katherines Road, Henley, with 10 A*s and one A grade. She hopes to study history, German and maths at The Henley College.

She said: I am amazingly happy and really shocked.

India Burgess, 16, of Baskerville Road, Sonning Common, achieved nine A*s and two A grades. She plans to study A Levels in history, French, music and biology at The Henley College.

She said she was going to Reading Festival on Saturday to watch the Arctic Monkeys. 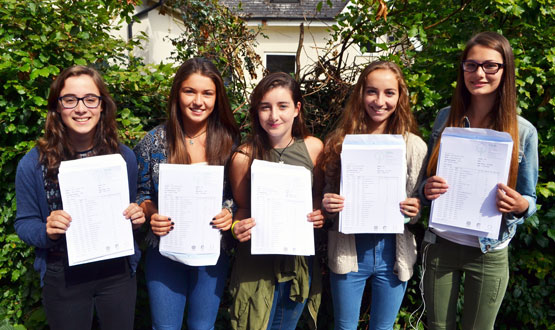