THE achievements of students at The Henley College were recognised at its annual education awards.

Thirty-five teenagers were presented with certificates at the ceremony in the colleges Rotherfield Hall.

The maths prize went to Will Manson, from Shiplake Cross, who was described as an outstanding mathematician. 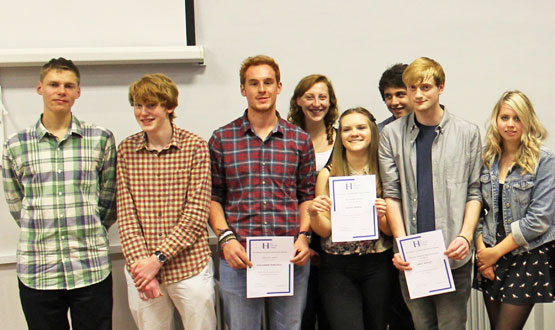 Will, who earned a place at Fitzwilliam College, Cambridge, said: Im obsessed with maths but I had to put in a significant amount of work to pass the sixth term examination paper, a large part of my Cambridge offer. There were plenty of nine-hour library sessions.

It would not have been possible without the unending support of my parents, who gave me the space and time to study. I also owe an awful lot to the staff at Shiplake Primary School, Gillotts School and The Henley College, who have supported my interest in maths for the past 14 years.

Laura Burgess, from Sonning Common, won the A-level award after impressing her tutors with her academic ability and work ethic. She achieved four A-levels and an extended project writing a novella during her two years at the college, gaining two A*s and three A grades.

Laura, who is a grade eight saxophonist, wants to become a doctor and undertook a range of work experience, including three weeks at a hospital in India. She has taken up a place at Birmingham University to study medicine.

College principal Tom Espley said: The awards evening is one of the highlights of the college year and an occasion to celebrate the wonderful achievements of our students on a wide variety of courses. This success is down to their hard work and the superb standard of teaching at the college as well as the support of their families.

The other award winners were as follows: