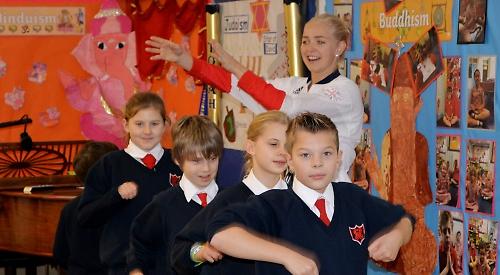 PARALYMPIC and world rowing champion Pam Relph gave a talk about her career to pupils at Sacred Heart Primary School in Henley.

The 27-year-old Leander athlete explained how it felt to win gold in the mixed coxed four in Rio this summer.

She then e nlisted the help of year 6 students Noah Allen, Natasha Rasmussen, Cameron Osborne, Pia Butcher and “cox” Damian Fannan to demonstrate how her crew were positioned in their boat.

Relph, who has a form of arthritis in her right wrist, showed the youngsters her medal, which is filled with beads that rattle for the benefit of visually impaired athletes, and answered questions. She said: “It’s quite scary before a race starts because there are lots of other competitors and you really want to win. Some people cry when they win but I was very happy and smiley because I knew I would have to get up on the podium and I knew my mum, dad and three sisters were watching. I was very tired but very excited.”

Afterward her talk, Relph said: “I really enjoy doing these talks and think they’re very important. The children seemed to really enjoy it as well. Hopefully they will go home and ask their parents all about the Paralympics and disability in general.”

Headteacher Gez Davis said: “It’s important to inspire children and people like Pam, who is incredibly approachable, will get them thinking about what they could achieve.”